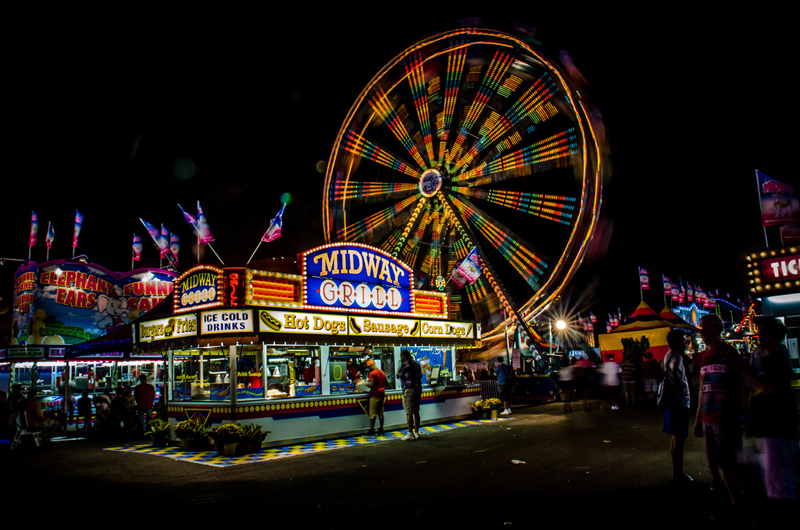 A Love Affair with the Summer Fair

Summer is here and by now, that means that fairs of all sizes and types – from the local yokel parking lot special to the massive state fair – will be coming to a town near you and setting up all summer long. Living across the street from where my own city fair is held, I hear the screams and shrills from every walk of life as people swarm the fairgrounds, getting me excited for what all the fair brings to the town. That means tractor trailer-loads of entertainment, rides, to cool-ass animals and fried foods. While sitting here, watching the colorful madness unfold in the civic center parking lot, I thought of some reasons to attend your local fair during the summertime. Even though you may not be a kid anymore, fairs are still just as enjoyable as the time you spent bitching for the stuffed animal you lost a week later, or screaming for the ice cream you ended up dropping on the pavement as soon as your parents paid for it. When you decide to go, and everyone does – I recommend going at night, when all the lights are on and everyone imaginable comes out of hiding. It makes the experience a little livelier. Plus it’s not as hot, giving you a far less chance of getting swamp ass (you’ll do best to Google that).

The rides. One of the big reasons people go to the fair is for the rides. Now, I’m not a big ride person as I used to be growing up, but if you’re feeling like a young buck again, there are a plethora of rides to engage in. Rides that flip you upside down, swing you around and around to lifting you above the entire fairground. Now these rides aren’t quite as illustrious as the theme park versions, but if you’re an adrenaline junkie – and don’t mind waiting in line with the local teeny boppers while they talk about Bieber or high school football – then get your tickets. If you’re on a date and you want to get some points with your girl or guy, take your date up on the ferris wheel. The view is great and you can see the entire fairgrounds. While you are up there, do some romantic shit – tell them you love them and that the view is just as beautiful as they are, then kiss, or some shit like that. They’ll love it. Bonus if you get on while the sun is setting.

Games. Now I don’t really play the games at the fair because they’re rigged….right? I mean that’s the perception of fair games anyways. Plus the carnies running them are really annoying when trying to pull you in and play their games. Their main job is taking you for a ride; otherwise, getting you to open your wallet. And doing it again. And again. They’re the used car salesmen of fairs. Yelling things like “Hey there guy, how about you try and knock these bottles over, bet you can’t!” Don’t fall for it. Now, of course you could knock every single bottle over… if it wasn’t rigged. The carny is just trying to piss you off so you’ll play his game. Whatever you do, DO NOT make eye contact. Just look straight ahead and move on. If you can, avoid the entire game isle.

But hell, don’t let that stop you from having some fun and getting yourself a giant stuffed animal or a goldfish. That’s just me. Now if you’re with a date the first thing on your mind is, shit, I have to win So-and-So a damn giant stuffed animal. No. No. No. Not only will you make yourself look like an ass trying to win her something from one of the rigged games, you’ll waste your time and money. Just stick to the ferris wheel move mentioned above. Now the one game that I recommend giving a try – or at least watching – is the ol’ smart ass in the dunking booth. I’ll stand there for a while and watch the other idiots spend their money on dunking the guy over and over again. It’s always entertaining watching a small child getting harassed and ridiculed then seeing them nail the target on the dunk tank and sinking the jackass doing all the talking. Good laughs for everyone. In fact, if you have a good arm, then show it off to your date and throw a few balls at the guy yourself. Just be sure that you at least sink his ass. At least in my case, no woman wants a guy that can’t throw.

Food and beverages. Another main reason people attend the fair is the abundance of food and beverages. I’m as guilty as anyone; I enjoy fried and greasy fair grub. Fried oreos, fried pickles, fried twinkies, fried chicken, fried anything – I could go on like Bubba Gump and shrimp – you get the idea. There are lots of delicious not-good-for-you-at-all food vendors at the fair, so take advantage and enjoy. Personally, I enjoy a nice slice of pizza with some ice cold lemonade. Oh and let’s not forget funnel cakes.

Animals. One of my utmost favorite things at the fair is the animals. I’m not talking everyday animals like your pets. I’m talking elephants, kangaroos, camels, alligators, tigers and others of the wild kingdom that you normally see on TV. Although you do feel sad when you see them in this environment and would prefer them in their natural habitat, you get an appreciation of these wonderful and extravagant creatures. I mean, it’s not every day you see a freaking Kangaroo! If you have kids I recommend taking them to the petting zoo. Yes I know, it’s stinky and germy but to kids it may as well be paradise. I suggest saving the petting zoo for last after eating some fair grub.

Fireworks. Now depending on when your fair is in town there may or may not be fireworks. I know when the fair comes to my town it’s during the 4th of July and they have fireworks just about every night they are in town. So check your local papers and see if there will be fireworks at your fair because ending a day at the fair with some fireworks is awesome!

People watching. If you’re low on cash but still want to have a good time, I have two words for you: people watching. Usually it’s free to enter and walk around any fair. Which draws anyone and everyone – and that’s not mentioning the carnies that run the fairgrounds. To me people watching is THE highlight of going to the fair. You’ll definitely see some head-shaking, double-taking stuff. There’s also a good chance you’ll also see people you know and risk the chance of running into the dreaded “frenemy”. So keep your head on a swivel and stay focused, in case you see someone you don’t want to run into. Let’s face it, we’d rather avoid people we really don’t want to see or talk to.

At the end of the day, fairs aren’t just for kids or teenagers – they’re a good time for adults, too. Especially if you have kids yourself to take along with you. Not only will they enjoy it and be occupied for hours on end, you may be as well. So get out, grab some friends and head on over to the fair. Let loose, have some fun and fill your belly with some well-past-the-point-of-guilty-pleasure food while watching the carnies do their thing.