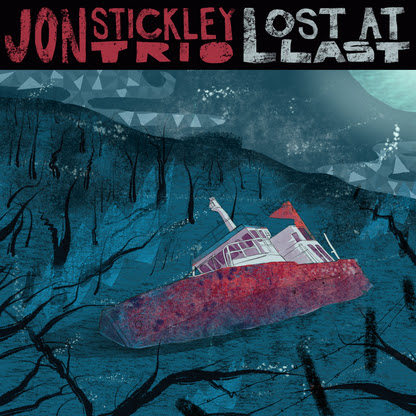 From the opening notes of the first song, “Point to Point”, you become acutely aware this is not just a bluegrass record. Combining elements of rock, Gypsy Jazz, Americana and bluegrass, with a touch of dub-step thrown in for flavor, The Jon Stickley Trio’s new album Lost At Last is an incredibly well put together sophomore effort from the Asheville, NC group.

Funded by an online Kickstarter campaign and produced by Dave King, the album was recorded at Echo Mountain Studios in Asheville. Featuring Jon Stickley on guitar, Lyndsay Pruett on violin and Patrick Armitage on drums, the album features 11 tracks, six of which are original compositions, including one written by Andy Thorn of Leftover Salmon.

A highlight of the record is “Darth Radar” a crowd favorite at live shows, the song is a mash-up of influences including Skrillex, Deadmau5 and surf rock king Dick Dale. It sounds weird but it completely works. This frenetic 4 and a half minutes brings Stickley’s amazing flatpicking to the forefront. To call Stickley a virtuoso is not an exaggeration. His skill, speed and timing are right on point.

The album concludes with “Flight of the Durban,” which is Thorn’s contribution. It’s a triumphant closer and you can almost see Stickley smiling as he plays it, as he often does live.

This group’s future is bright and its popularity is quickly rising following a western tour and multiple festival appearances.

This is a fantastic album put together by three fantastic musicians and is highly recommended for anyone who appreciates good instrumental music done with passion and skill.