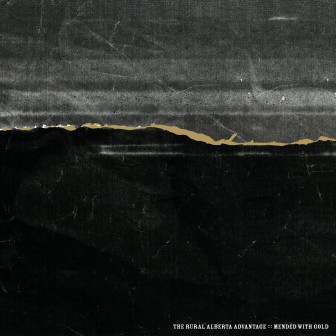 Since forming in 2006, The Rural Alberta Advantage has been hailed the world over for two distinct traits: making stark, melodic music that cuts to the quick, and putting on a white-knuckle live show thrill-ride.

Taking on a new approach for Mended With Gold – The RAA’s newest since their sophomore effort 2011’s Departing – the Canadian indie rock trio combines their minimalism blended with the frenetic live show to release their most powerful album to date.

Frontman Nils Edenloff spent time writing Mended With Gold tucked away within the Ontario wilderness of the Bruce Peninsula,
and with multi-instrumentalist Amy Cole and percussionist Paul Banwatt, the group whittled down the material on the road, as well as in the studio – a new experience for the group long known for filling dates on a tour calendar.

Adding in live sound engineer Matt Lederman – another first for RAA for recording an album – and co-producer Leon Taheny, the group captured the controlled recklessness of their live performances and brought it into the Candle Recording studios in Toronto.

The hallmark of RAA is the bold rawness of Edenloff’s vocals, shown nowhere stronger than on the charged-up opener “Our Love”, which sets the tone for the album – the give-and-take of love, memories and ambivalence of escapism – along with the guitar-drenched “On the Rocks” – where Cole joins in for a duet on the chorus. They keep the foot on the gas for the feverish ballads “Terrified”, “Runners in the Night” and “All We’ve Ever Known”, the former and latter a drummer’s showcase from Banwatt – and a dose of literalism with “Vulcan, AB” (and an equally literal video of the group wandering through the Trekkie-town of Vulcan, Alberta) –  the restraint from the three musicians is most powerful here, and the star of the album.

On Mended With Gold, the themes of love, loss and gain, and nostalgia remain for The Rural Alberta Advantage – only this time the tunes that emerge are a little bit bolder, a little bit louder – unafraid of standing on their own.

Check out The RAA’s website for more and iTunes to pick up a copy of Mended With Gold.