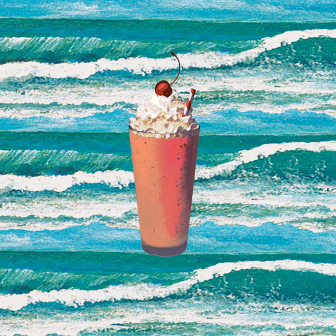 Austin, Texas lacks a beach, yet the sunny debut from the Lone Star state capital’s own  Shivery Shakes  will surely make certain life is one for those seeking a little escapism.

Formed from members of a pair of Austin bands (The Bubbles and International Waters), members William Glosup (vocals, guitar, piano), Marcus Haddon (vocals, percussion), Andrew Penmer (bass) and Jack Thorton (guitar) first weaved their surf-rock and ’60s-influenced melodies back in 2011. Releasing a self-titled EP in March the following year, followed by a 7″ single release, the group shared bills with Surfer Blood and The Soft Pack before working on the material for Three Waves & A Shake in the summer and fall of 2013.

The sunny vibes start flowing from the opener ‘Recurring Dreams’ – carried with whistling and jangly guitar – to the plucky riffs and guitar solo on ‘Take It Back’. Commence hits cruise control on ‘Swimming’ (Glosup and Haddon serve as the band’s song scribes; this is one of two written by Haddon) to the slow-dance number ‘Summer Lover’, evoking thoughts of the ‘Enchantment Under the Sea‘  from Back to the Future.

Self-reflection comes in waves on the closer ‘Time Will Tell’ and the seventh track, ‘One More Try’, that even with thoughts of the unknown ahead of us all, the group isn’t about to ditch their dreamy optimism: ” I’m so close of giving up / cutting my losses and saying goodbye / but I’ve come this far / so I’m gonna give it one more try.”

As for keeping summer eternal well into the winter season, sounds like these guys got things right the first time.

After touring the East Coast throughout the summer, Shivery Shakes embarks westward through November. Click here to pick up Three Waves & A Shake.