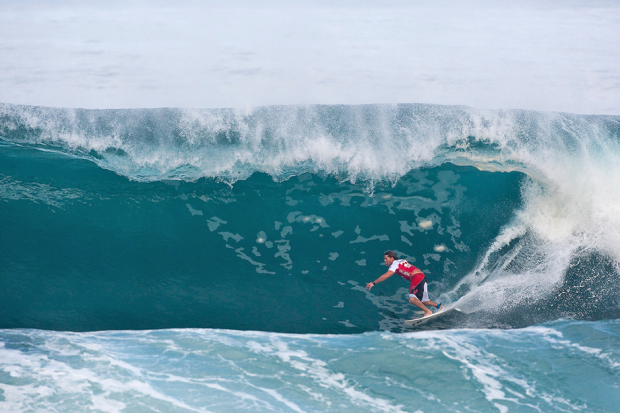 After dispatching Jordy Smith (ZAF) in the final at the Moche Rip Curl Pro Portugal last week, defending world surfing champ Mick Fanning (AUS) finds himself only 3,450 points behind current World #1 Gabriel Medina (BRA) in a tight race for the 2014 ASP World Title. Sitting in third place is Kelly Slater (USA), seeking his world-record 12th world title, 3,050 points behind Fanning and 6,500 behind Medina (10,000 points awarded to contest winners, 8,000 to 2nd place, and 6,500 to 3rd place). World number one Medina was dealt an early upset by Brett Simpson (USA) in the third round, while Slater fell to Aritz Aranburu (SPA) in Round 4. Fanning’s victory in Peniche knocked Slater from second to third in the world rankings.

With the final World Tour event of the year approaching in December at the Billabong Pipe Masters in Hawaii, the ASP breaks down the following scenarios, and it all begins and ends with Gabriel Medina on the North Shore:

The Billabong Pipe Masters runs Dec. 8-20 on the island of Oahu, Hawaii. Tune in to watch the event live on the ASP website.