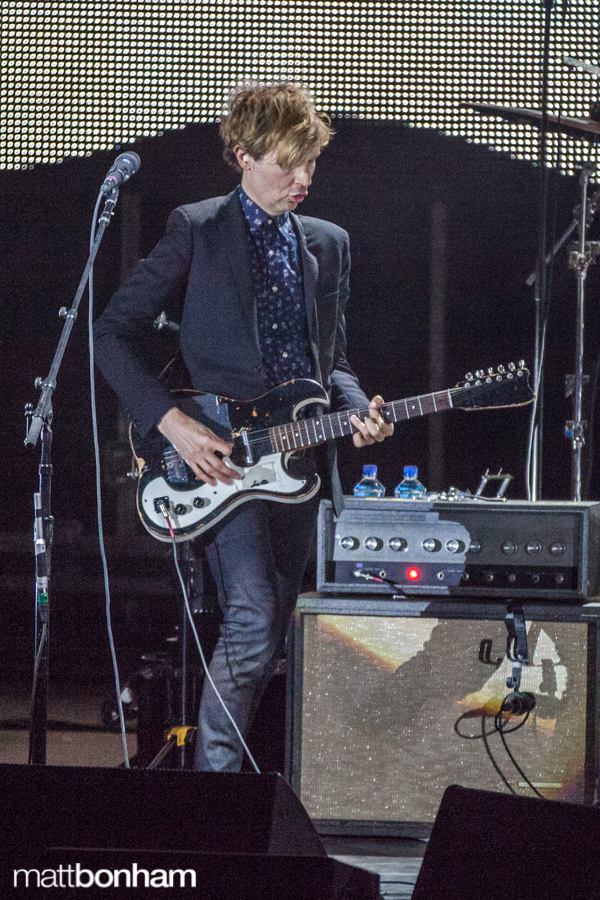 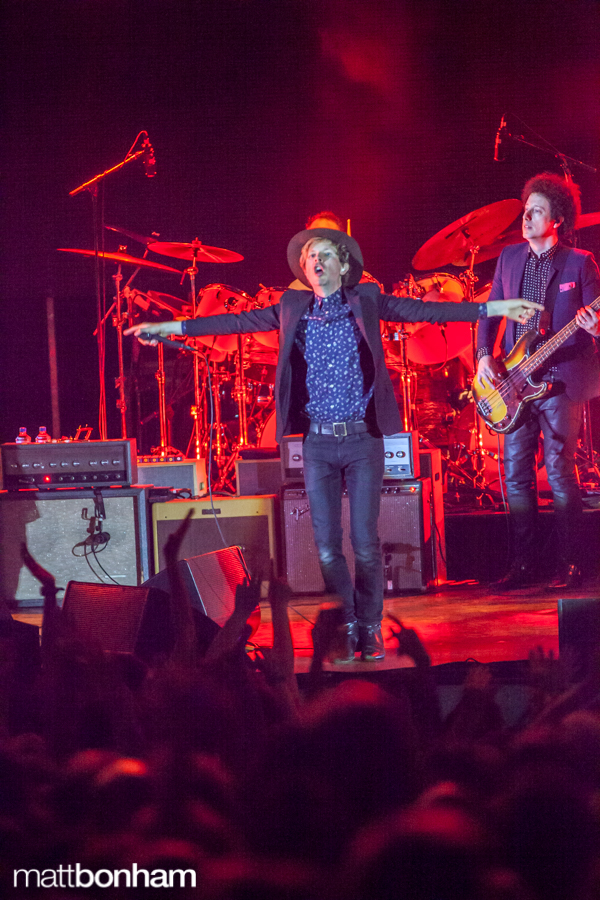 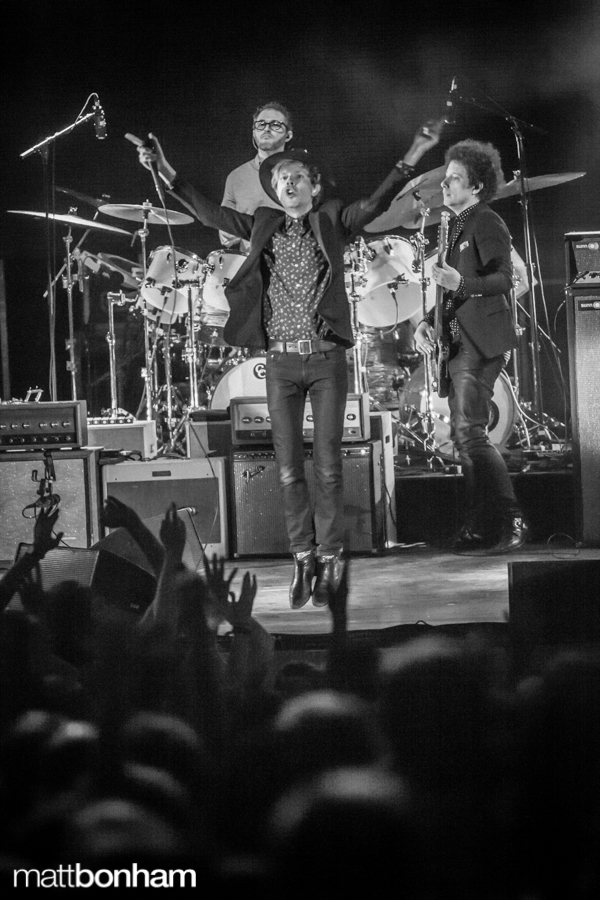 A packed house awaited Beck on the night he brought his music to Charlottesville, VA.

Opening with the energetic “Devil’s Haircut”, “Black Tambourine”, and “Loser”, fans in the soldout nTelos Wireless Pavilion were dancing in the aisles Wednesday evening as the sun was dropping below the horizon, followed by “Beercan” and “Que’ Onda Guero”.

Admitting to the crowd, “Since it’s almost summer, we’re gonna play a little beach song…a little surf rock,” he launched into “Gamma Ray”. Equal parts musical explosion and light show, under the pavilion’s white, sail-like canopy, Beck shimmied and danced across the stage, his wide-brimmed hat and a guitar never more than at arm’s length.

The well-traveled troubadour showcased his wares – his genre-defying catalogue spans across lo-fi, folk, anti-folk, jazz, rock, blues, country, rap and the list goes on – throughout the evening as he and his bandmates played tunes from his early days to his latest work, the Grammy Album of the Year, Morning Phase. 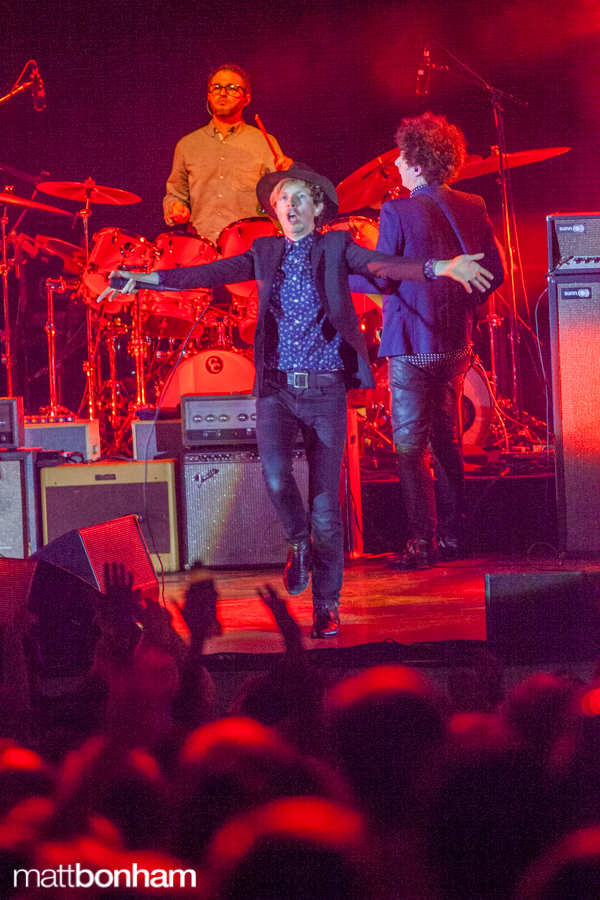 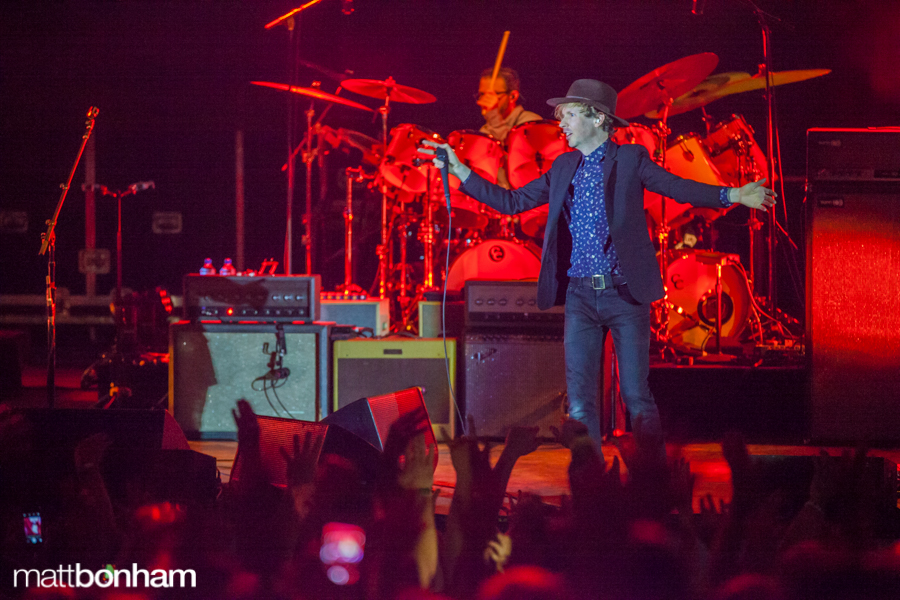 After a freestyle rapping intro to his bandmates, Beck jumped into a melodic “Hell Yes” then a “Go It Alone”. Hansen then brought the tempo down a few notches with a soulful/moody “Blackbird Chain” from Morning Phase, set to blue lights and strumming on his acoustic.

A fan yelled, “I love you!” from the audience, prompting Beck to reply, “I love you, too…I think I’m in love,” before breaking into the percussion-driven “Think I’m In Love”, from The Information, blending in Donna Summer’s “I Feel Love”.

Next up was the thumping “Soul Of A Man” from Modern Guilt with Beck pacing the stage, laying down crunchy riffs, punctuated with a bass-heavy “Paper Tiger” and “Lost Cause” from 2002’s Sea Change. Then “Blue Moon” opened to “Waking Light”, the closer on Morning Phase. 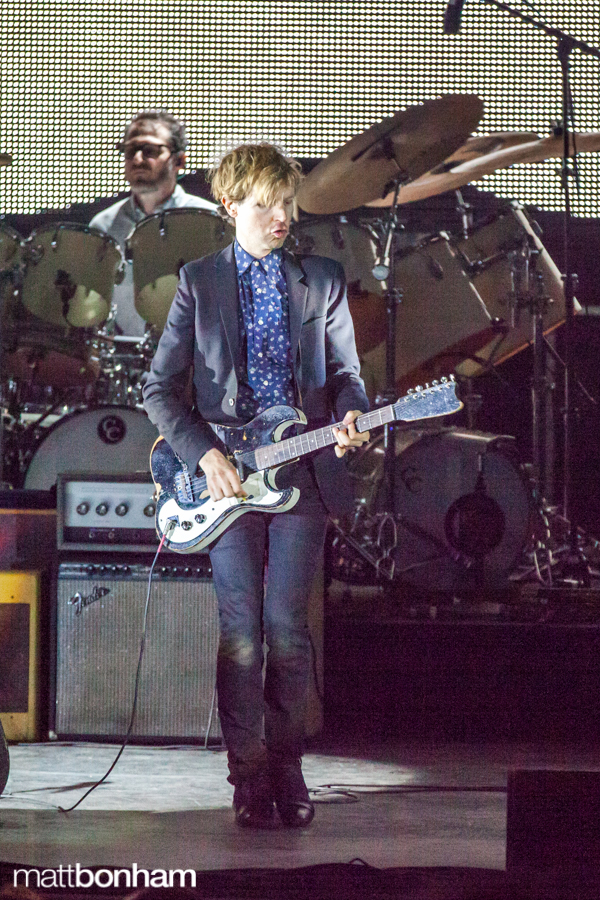 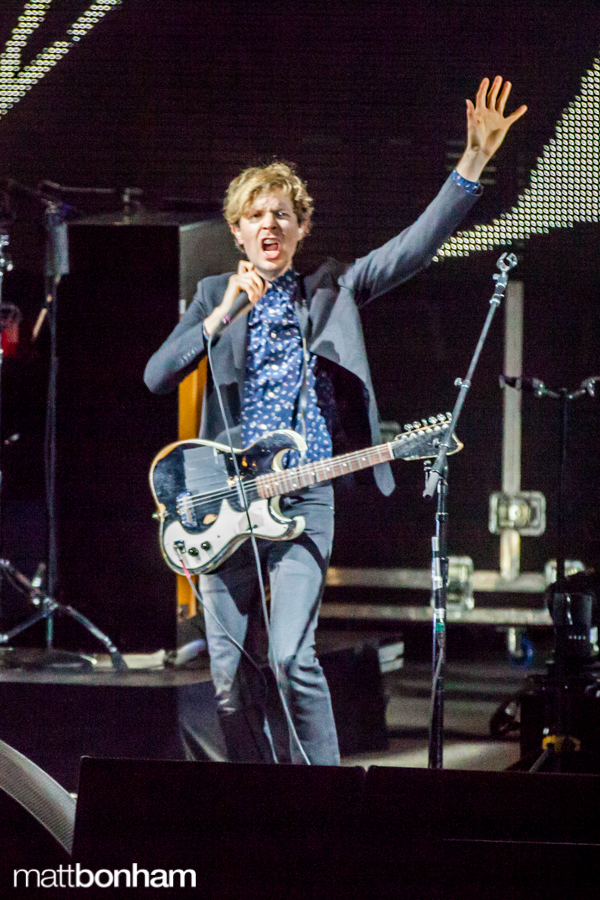 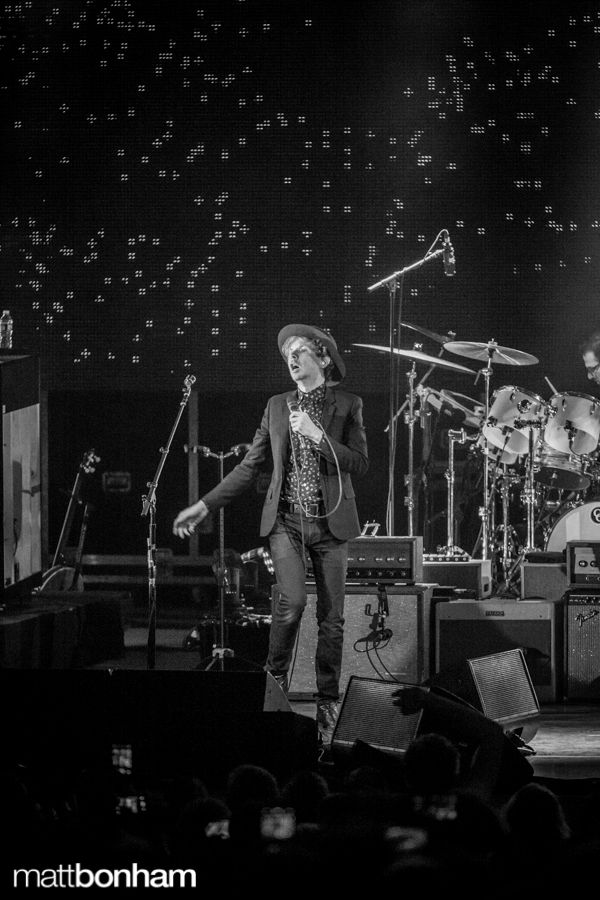 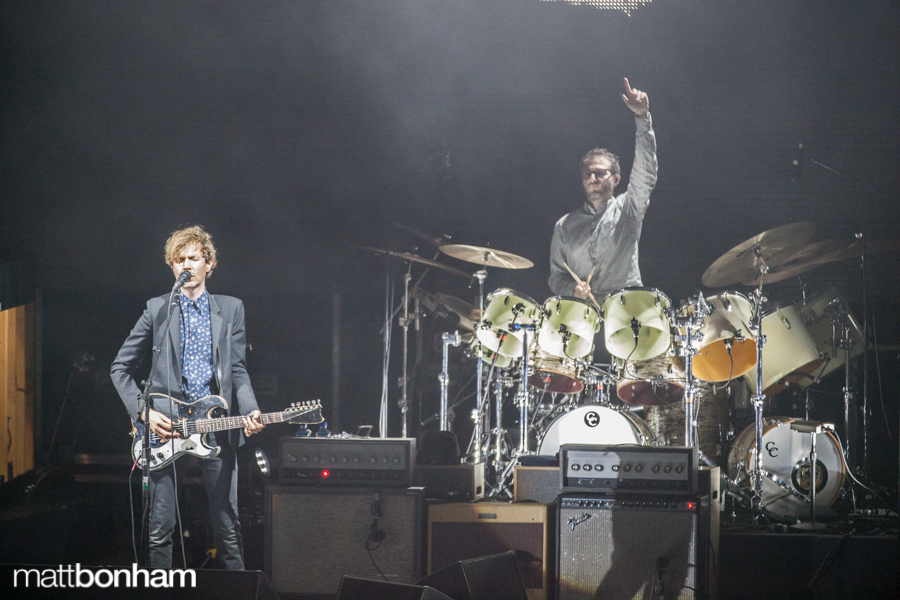 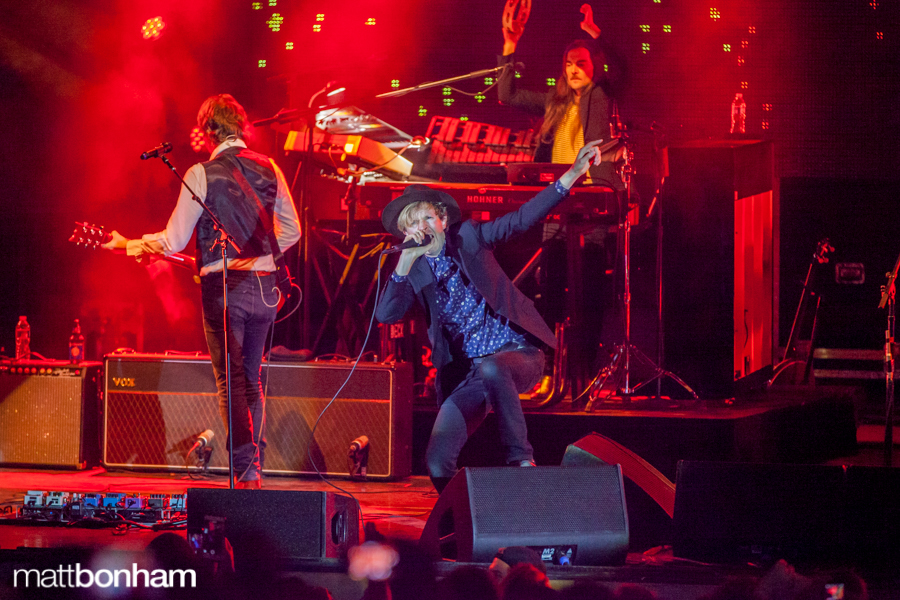 Well into the spring Virginia night, he went Guero with a funky “Girl” and proceeded to lay down the “Sexx Laws” leading into an emphatic “E-Pro” – sampling a Wilhelm scream into the mix.

For the two-song encore, Beck, ever the storyteller, revisited the evening’s musical journey with the crowd on the songs played, and moving into the subject of love, introduced “Debra” from 1999’s Midnite Vultures to a few thousand of his newest friends. For the finale, he and his bandmates broke into a multi-part “Where It’s At”, and Beck felt the love from the packed house, admitting, “I feel I could stay here all night with you. I feel so comfortable with you. Could I stay here forever?”

Introducing his bandmates, Justin Meldal-Johnson on bass, Jason Falkner on guitar, Roger Manning on keys, then Joey Waronker on drums. Announcing it was Waronker’s birthday, Beck led the crowd in singing “Happy Birthday”, exclaiming of Waronker, “He could’ve take a day off but he played drums for you…all night!” drawing rousing cheers from the packed house.

Before the show ended, Beck and his mates returned to “Where It’s At” with Beck cutting some notes on the harmonica – teasing “Rapper’s Delight” as well as his “One Foot In The Grave” from Stereopathetic Soulmanure. By now, the stomping of feet rattled the pavilion floor, cheering from crowd punctuating the familiar “two turntables and a microphone” refrain with Beck leading overhand claps to end the show. After the final bow, the musicians huddled – then comically, scuttled offstage. And like that, Beck and Co. slipped out into the night, another epic show in the books, another packed house amazed. 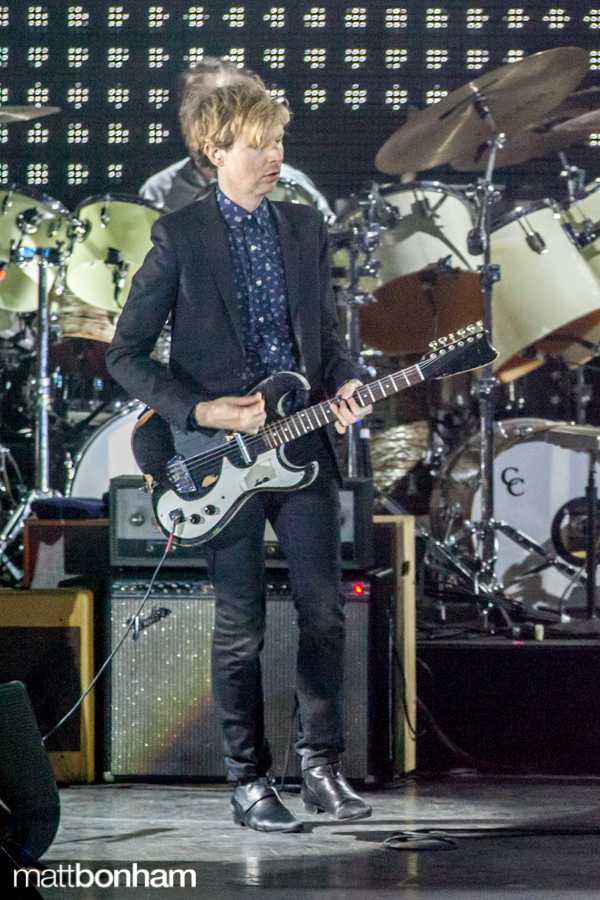 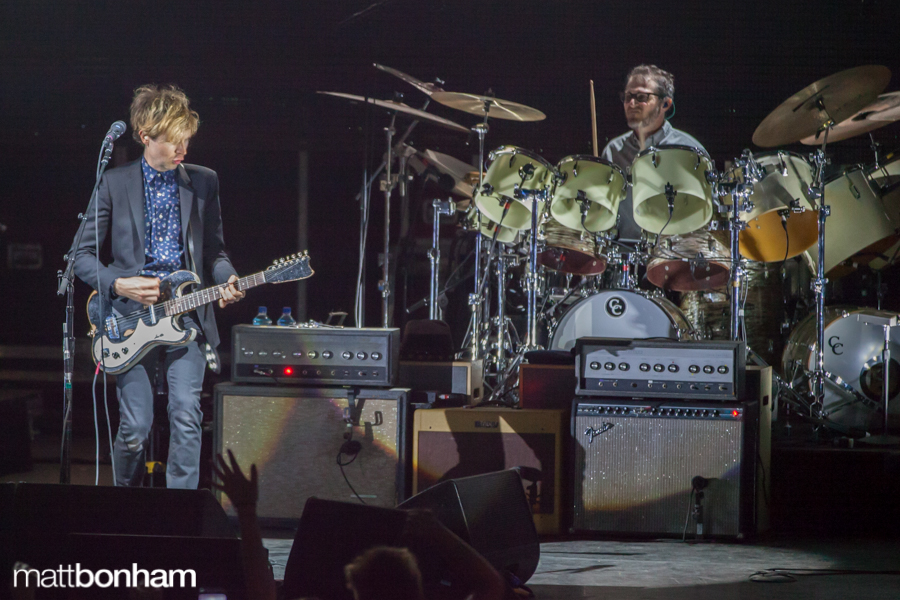 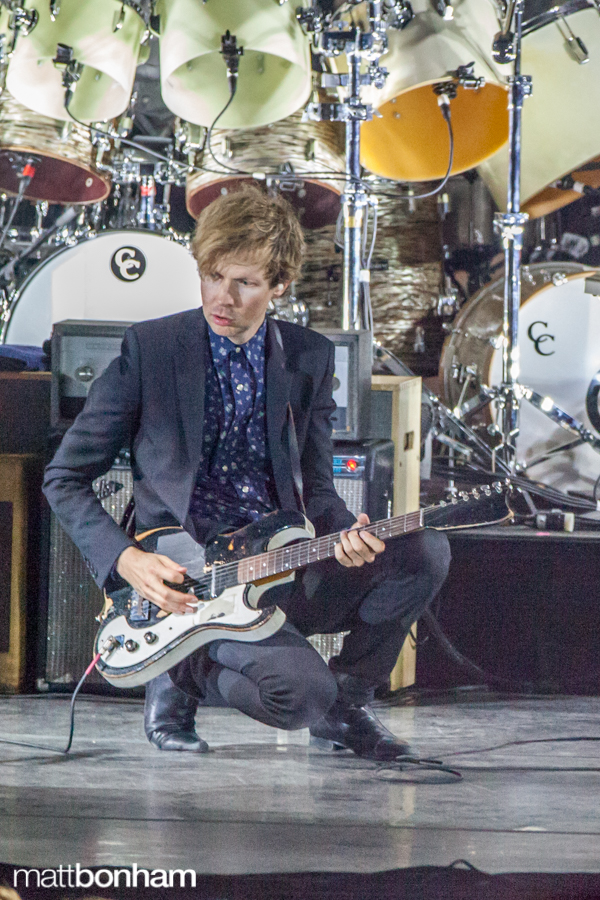 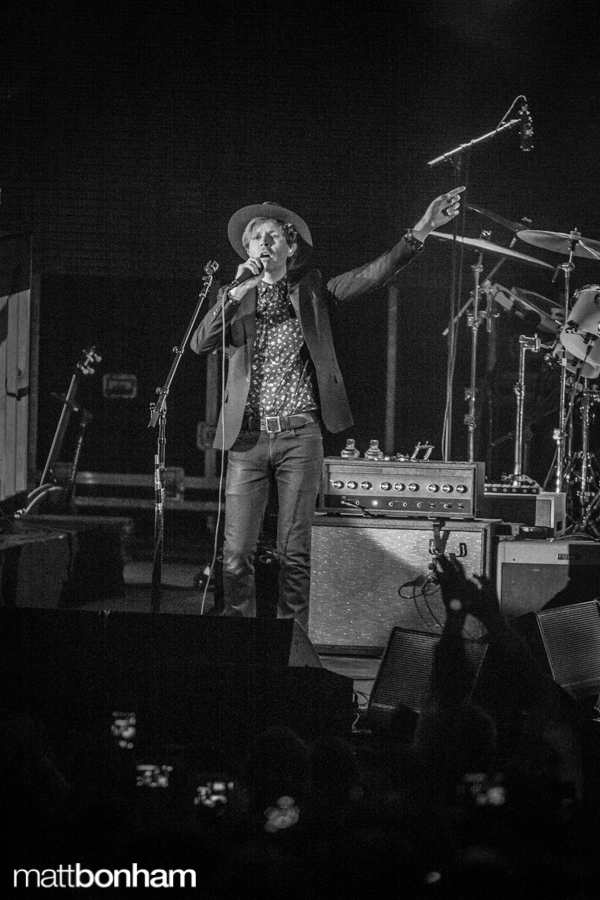 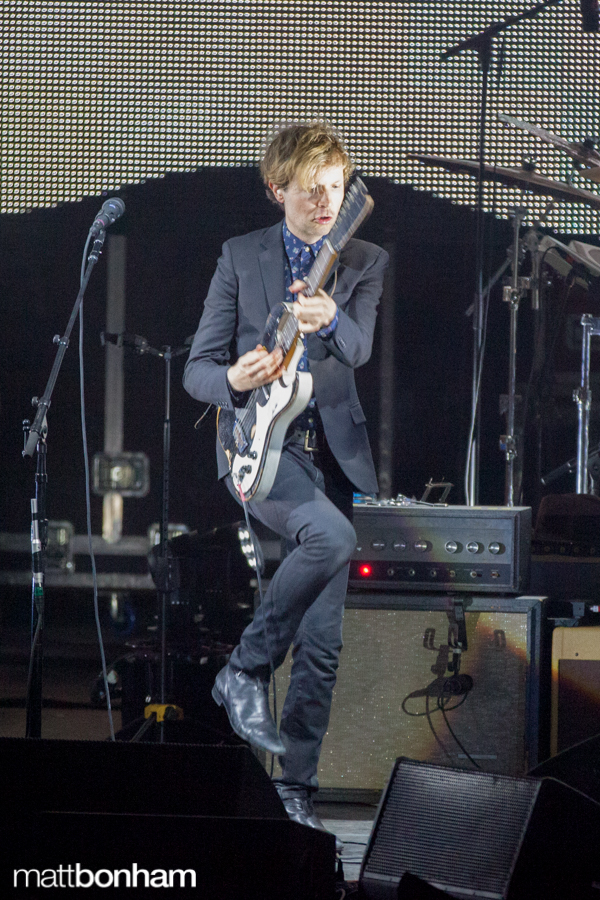 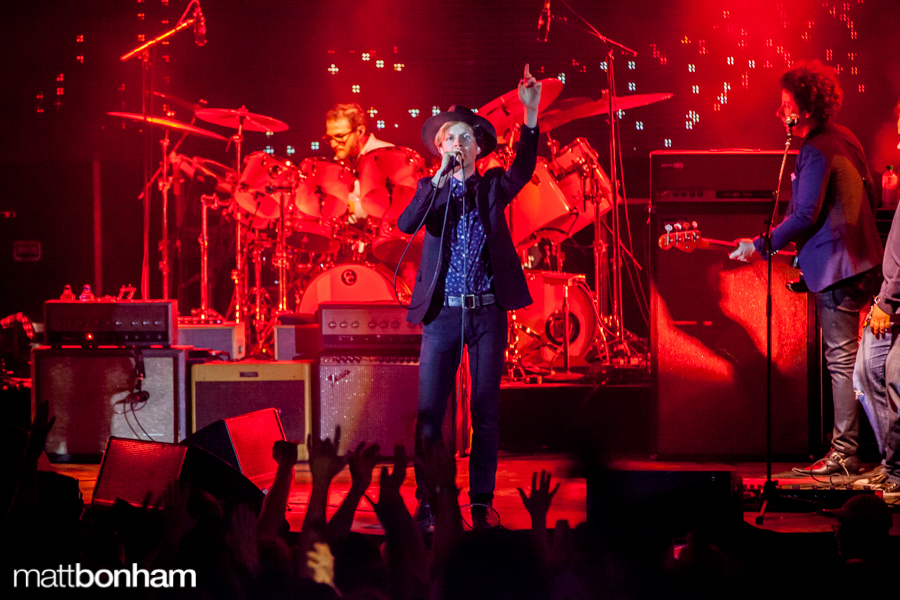 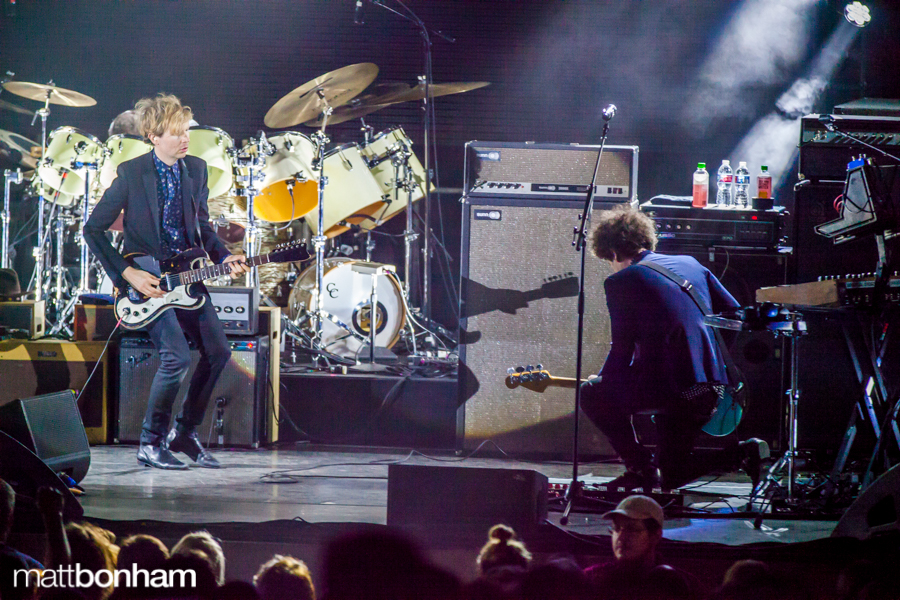 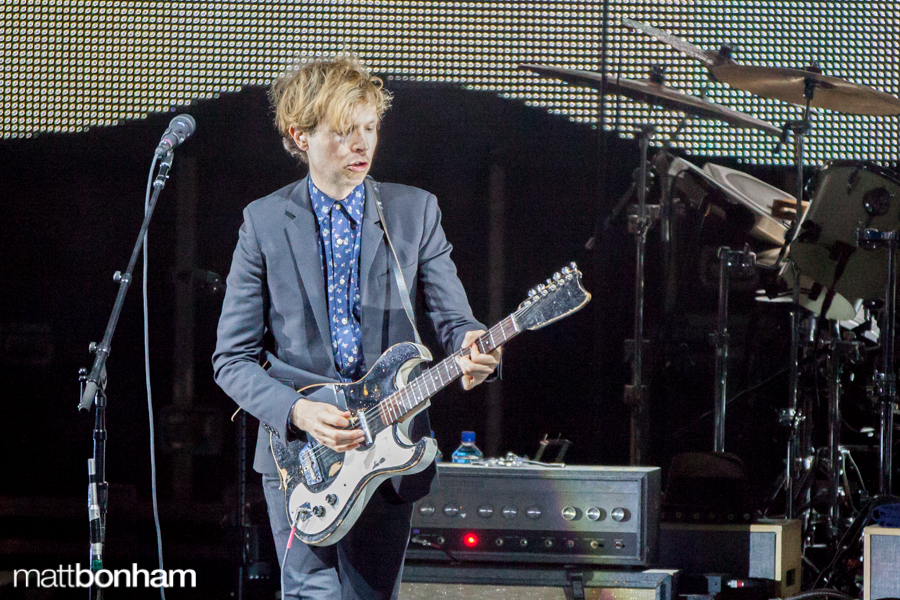 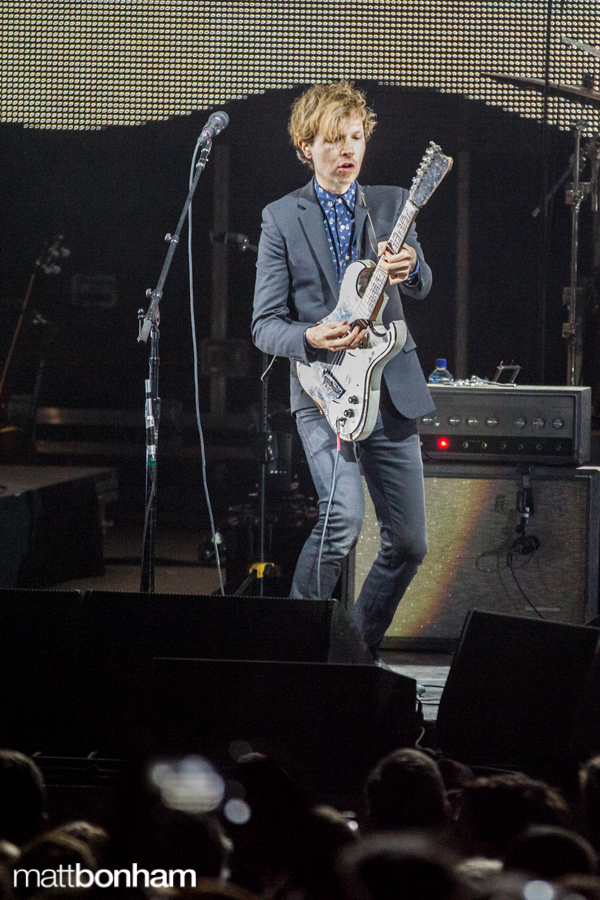 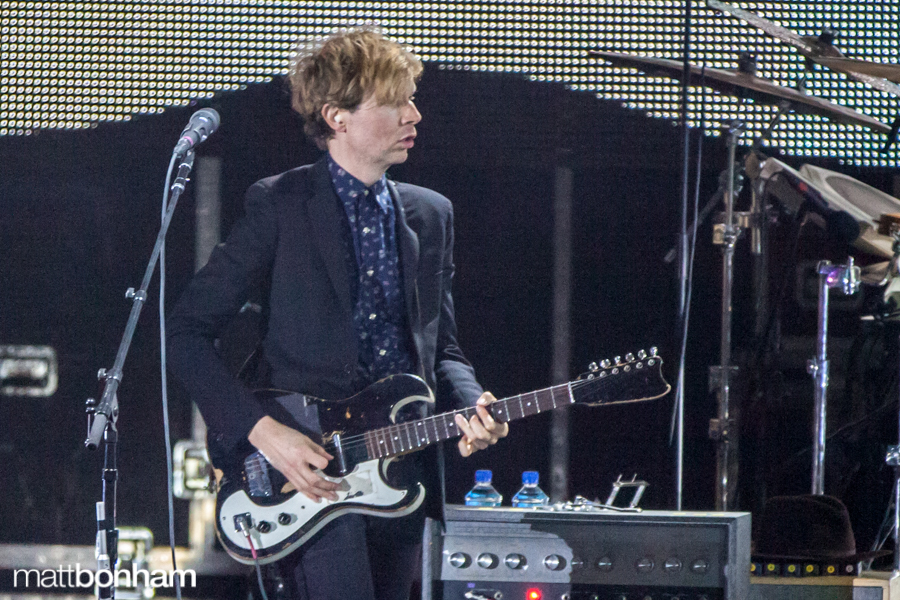 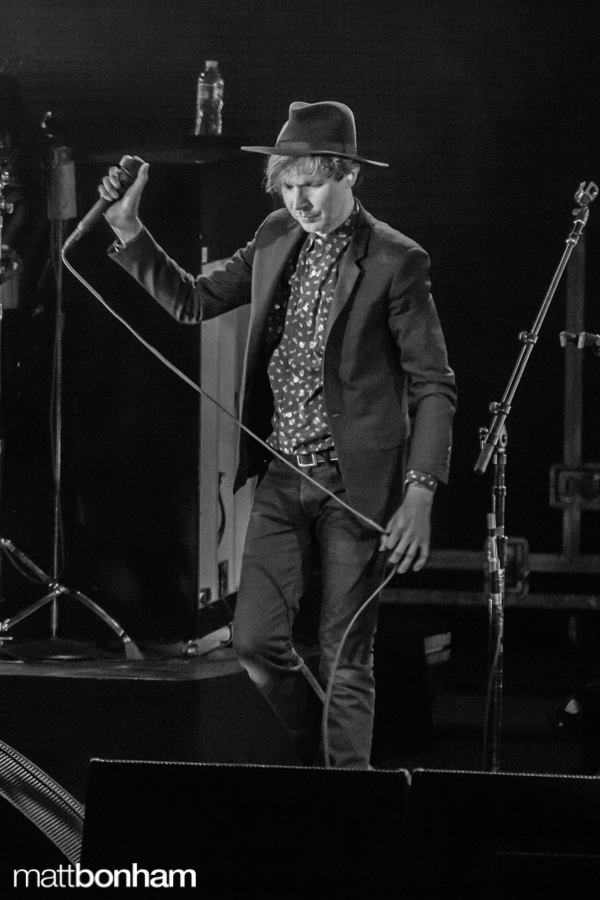 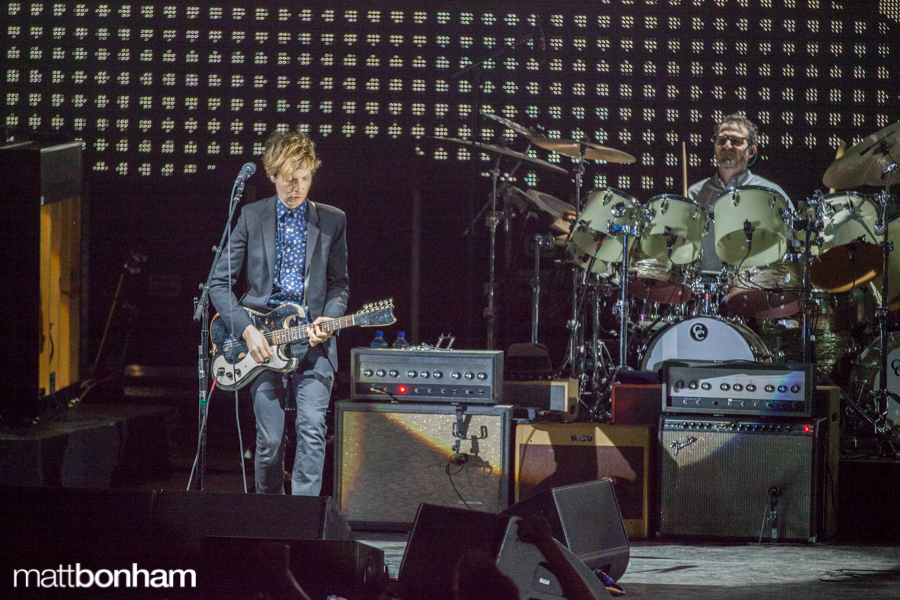 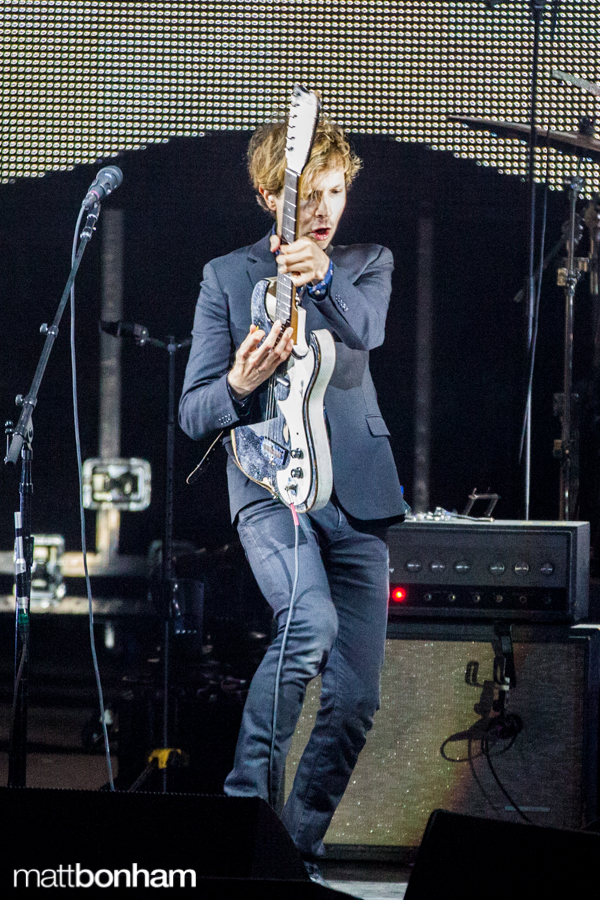 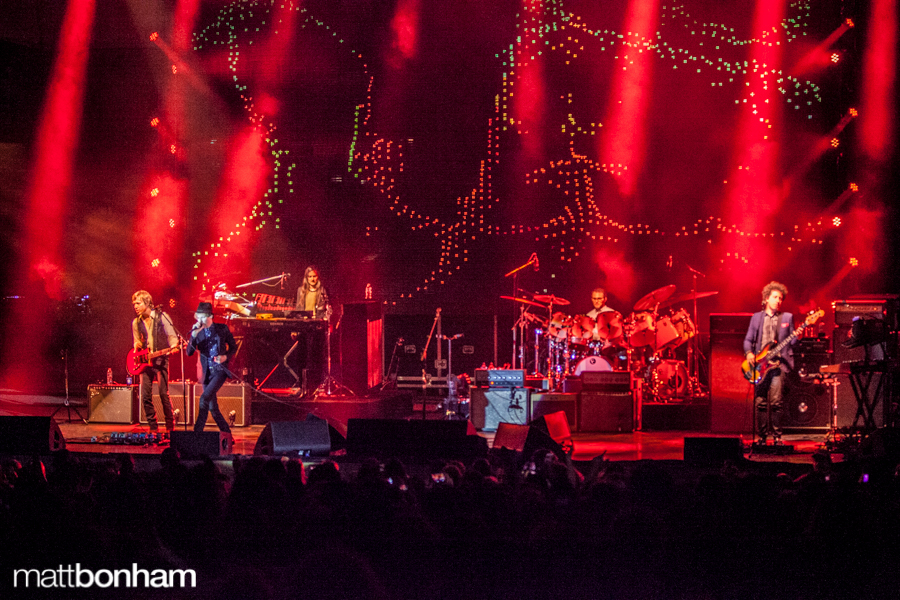 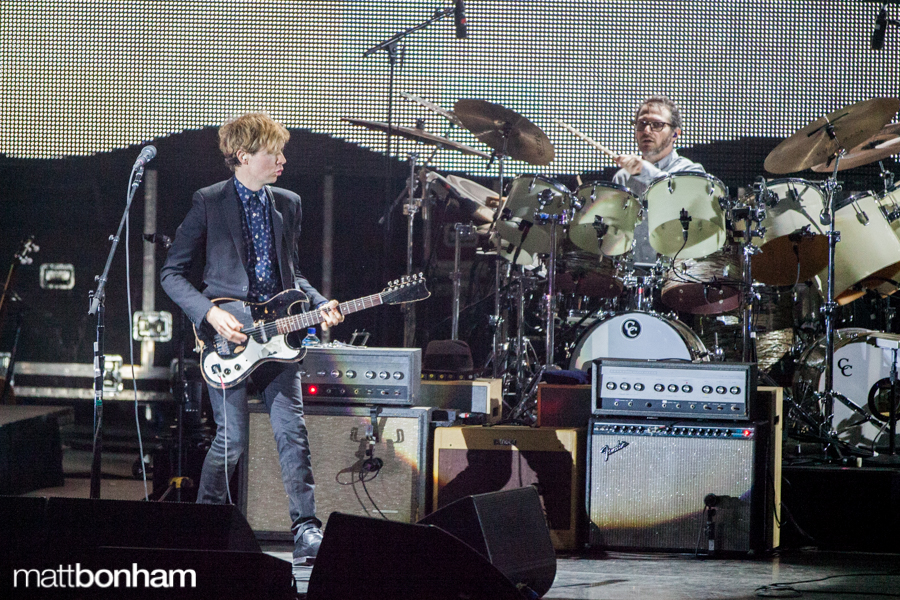 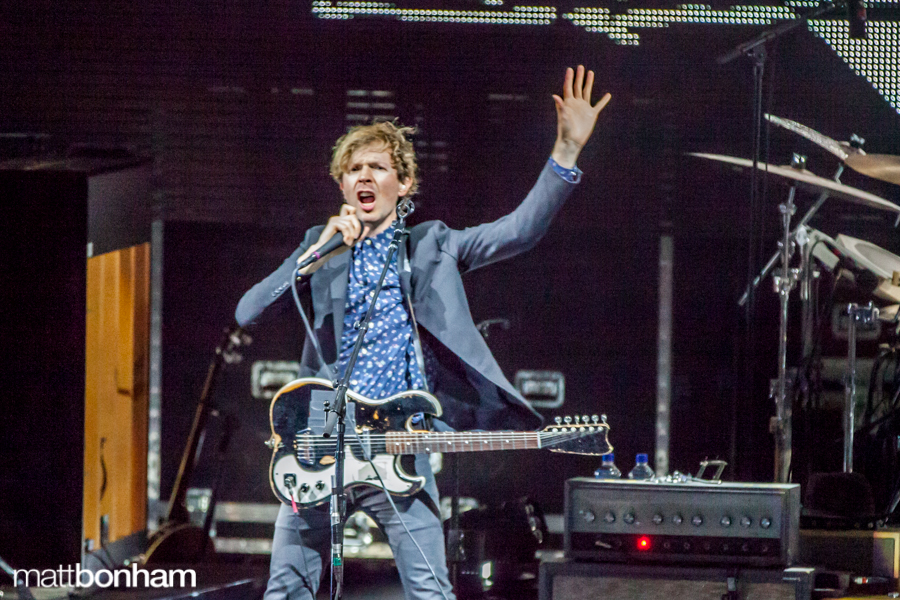 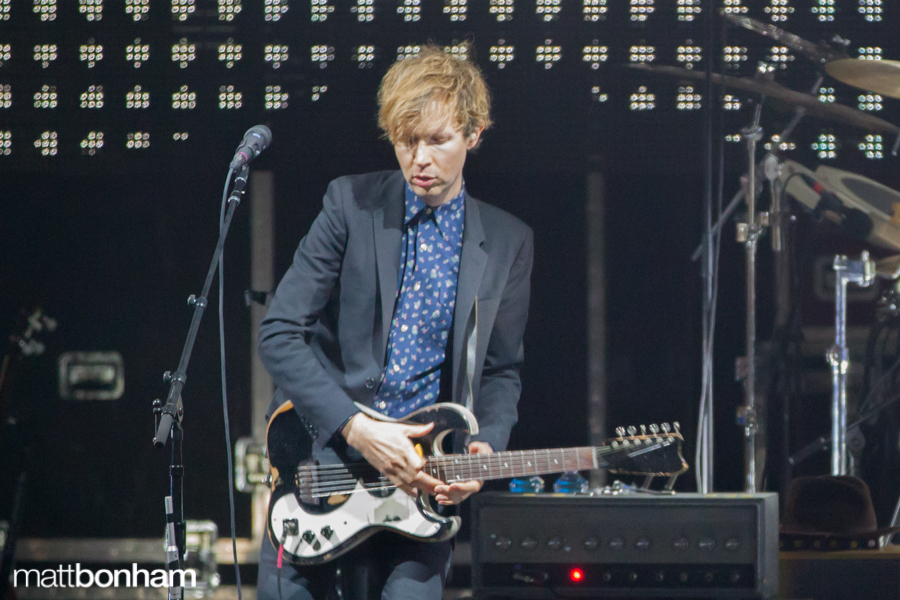 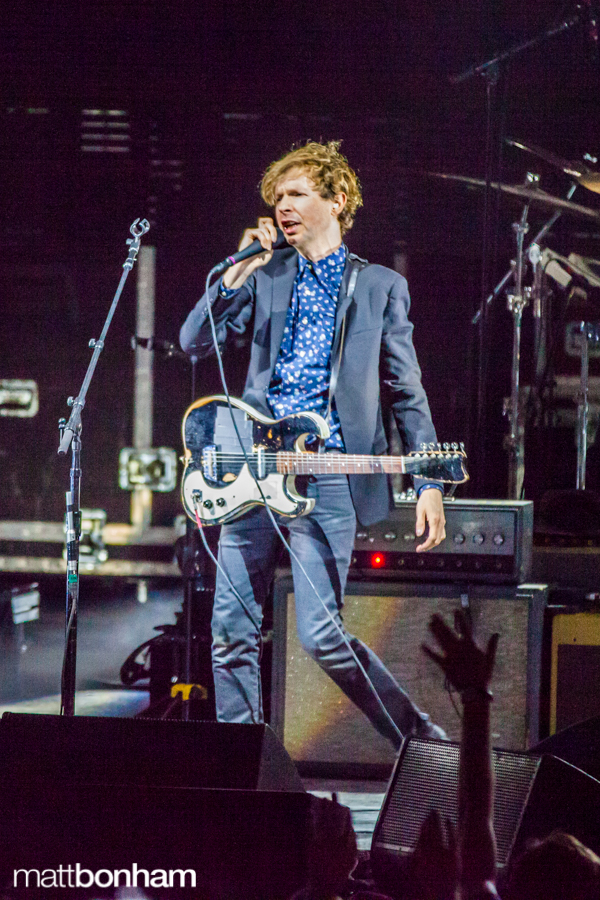 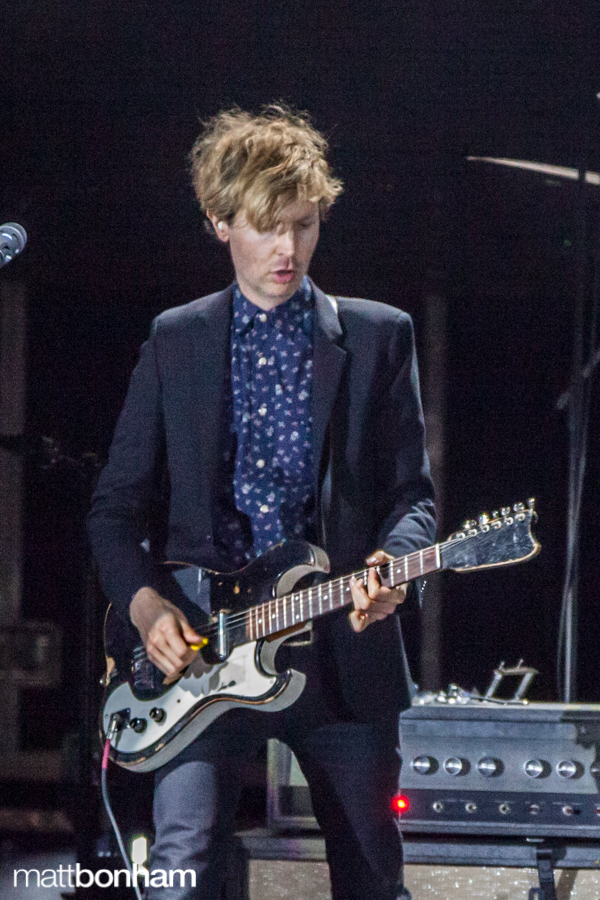 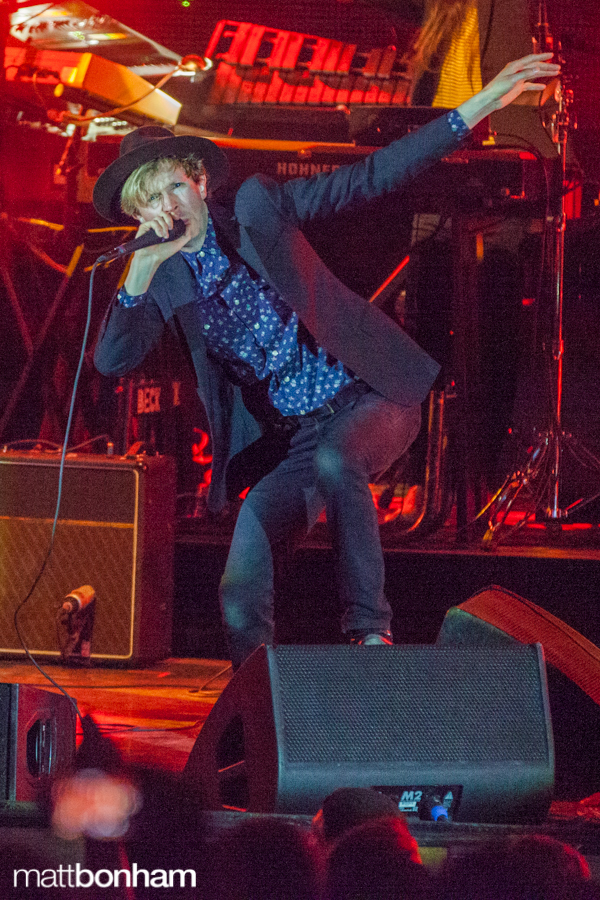