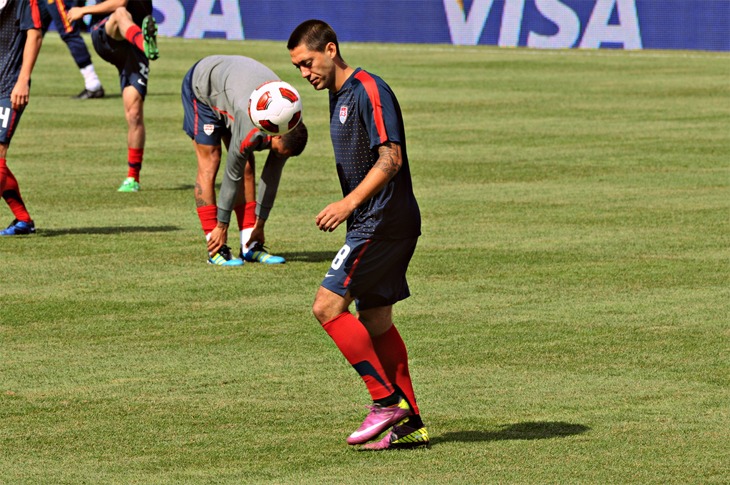 While spending a few days visiting friends in Greenville, South Carolina recently, I drove by Furman University on my way into town, passing the bold brick signage outside the canopy surrounding the lush campus located on the city’s outskirts. For a moment, I think about Clint Dempsey, forward and captain of the U.S. Men’s National Soccer team, and former Furman soccer standout. By way of East Texas. On the eve of the World Cup, there are no signs in town or around campus on Route 276 noting anyone passing through about Dempsey, one of the school’s most famous alumni, or of his unpredictable journey through Greenville towards becoming an international soccer star, and well on the way to becoming the face of American soccer.

When the United States takes the pitch today against Portugal in the rainforest city of Manaus, a captain’s armband around his sleeve, Dempsey’s focus will be leading the Americans to greater heights than they have achieved previously in the World Cup.

From humble beginnings as a child in East Texas to becoming a star in the most famous soccer league in the world, now back playing professionally in the United States, Dempsey hopes to take the U.S. Men’s National Team to the knockout round in the World Cup and beyond, making him a household name in the process.

With the help of Dempsey’s goal in the opening seconds against Ghana, the USMNT secured an opening win in the World Cup and now faces mercurial forward Cristiano Ronaldo and Portugal this evening. After being drubbed 4-0 by the Germans in their opening match, the Portugese will be seeking redemption against the Americans, and even with a half fit Ronaldo, pose a worthy challenge. Providing inspiration to the U.S. was Ghana’s 2-2 draw with Germany yesterday, the Americans now needing a tie with the Portugese to advance to the knockout round.

With coach Jurgen Klinsmann’s controversial cut of soccer poster boy Landon Donovan from the USMNT, Dempsey was awarded the captaincy and hasn’t looked back since arriving in Brazil, scoring the first goal against nemesis Ghana in a blistering 29 seconds, the fastest score ever by a U.S. player and the 5th fastest goal in World Cup history.

Hailing from the Deep East Texas town of Nagodoches, population around 30,000, Dempsey and his older brother Ryan grew up idolizing South American soccer, notably Argentinian star Diego Maradona, inspired by his footwork and flair for the game. The Dempseys lived in a Hispanic neighborhood and played against Latino children their age, and later against grown men in Hispanic adult leagues, while still a teenager.

Watching Maradona, Dempsey saw “a player that could take over the game,” he told the Dallas Morning News in a 2006 interview. In order to play against stronger youth competition on the soccer field, the two brothers were drawn to Dallas, three hours away. The Dempsey family frequently made the six-hour round trip to Dallas for Clint and Ryan to play for select youth clubs, and his parents sold numerous possessions to cover gas money and travel expenses. Clint’s footwork impressed the youth coaches, and he earned a spot on the Texas Longhorns and the Dallas Texans youth club teams, also starring four years for Nagadoches High School.

With the hard-earned success came tragic heartbreak, this time also within the Dempsey family. His sister Jennifer, a budding tennis star in her teens, died of a brain aneurism at the age of 15. He honors her memory by looking to the sky after each goal he scores.

Driven by the game he loved, and fueled by emotion and determination, Dempsey sought more challenges by raising his level of play. While he found the goal often in his teenage years, in playing for his high school and for the select clubs, he didn’t draw the serious national attention from collegiate soccer programs he had hoped.

In 2000, Dempsey committed to Furman University, a small private liberal arts university of just under 3,000 students, without even stepping foot on the Greenville, South Carolina campus. While the school was small in stature, the Paladins were one of the strongest programs in collegiate soccer at the time. He starred for Furman from 2001 to 2003, racking up 17 goals, earning All-American honors in 2002, and leading the squad to two Southern Conference titles and two NCAA tournament appearances.

After his junior year, Dempsey was drafted by the New England Revolution of Major League Soccer, and won the MLS Rookie of the Year. Leading the Revolution to three MLS finals, his goal-scoring (he scored 25 times in 17 matches for New England) and play for the US Men’s National Team in the 2006 World Cup caught the eye of the English Premier League, arguably the strongest professional soccer league in the world, and that same year, Dempsey left New England for the EPL side Fulham, joining Americans Brian McBride and Carlos Bocanegra. He started for five seasons, before transferring to fellow EPL club Tottenham Hotspur in 2012.

In 2013, after spending 7 seasons in the Premiership, Dempsey signed with Seattle Sounders FC of the MLS as a Designated Player, returning to the U.S. to play during the prime of his career to help grow the game in the U.S. as well as his family of a wife and three young children in the States.

In Brazil, despite the inexperience of many of his U.S. teammates on the World Cup and international stages, Dempsey is a seasoned pro with three World Cups to his name. He holds the distinction of being the only U.S. player to have scored a goal in three World Cup tournaments; first scoring for the Yanks in 2006 against Germany, again netting a goal in South Africa against England in 2010, and last week in the U.S. win over Ghana.

If the U.S. can limit Ronaldo’s touches – the Real Madrid star has been battling a knee tendinitis throughout the Cup – Dempsey and his mates hope to make history. With defenders Pepe (red card) and Fabio Coentrao (injured) out of today’s match, Dempsey could exploit the Portugese defense in attacking down the middle of the field. After suffering a broken nose against Ghana, Dempsey will be playing with additional motivation heading into the duel with Portugal.

He is a dangerous scorer, proven on the international level against the world’s best. In 7 seasons with Tottenham and Fulham, he netted 57 goals, the most ever by an American in the EPL. His determination, drive and firepower, blended with his swagger and infinitesimal confidence on the pitch, makes Dempsey one of the most exciting players to watch during the World Cup, and an easy favorite among U.S. fans.

Soccer is the sport that has driven Dempsey first across the state, then the country, and for over the last decade, the world. One hopes he will continue taking the sport to a global level in the United States.

If Dempsey and the U.S. win today against Portugal, he will be well on his way again.