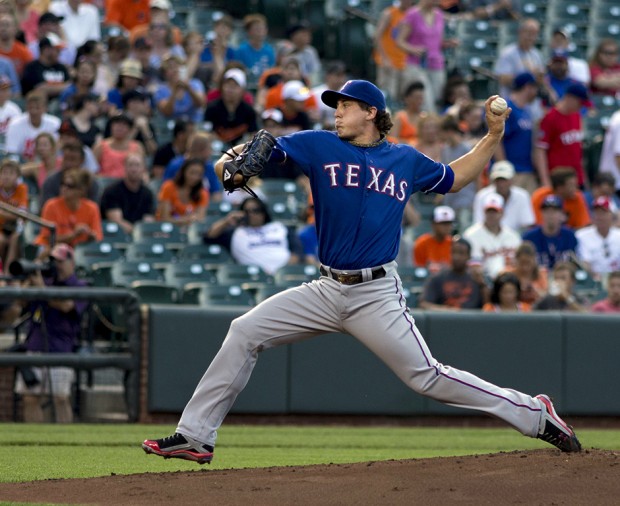 Live Like Nothing Is Wrong: The Story of Briggs Berry and Derek Holland

It was an unseasonably cool night in Kansas City, but one he had been dreaming of for months.

As he took the field for the first time in 2014, nearly five months later than he had originally planned, the emotions of the event slowly took over. He jogged to the mound, took a moment to look around the half-empty stadium, and took a deep breath. Before toeing the rubber, Derek Holland paused at the back of the mound and wrote the name “Briggs” in the dirt with his left index finger. A quick zoom in from the television cameras revealed the same name written in silver on side of Holland’s shoes. 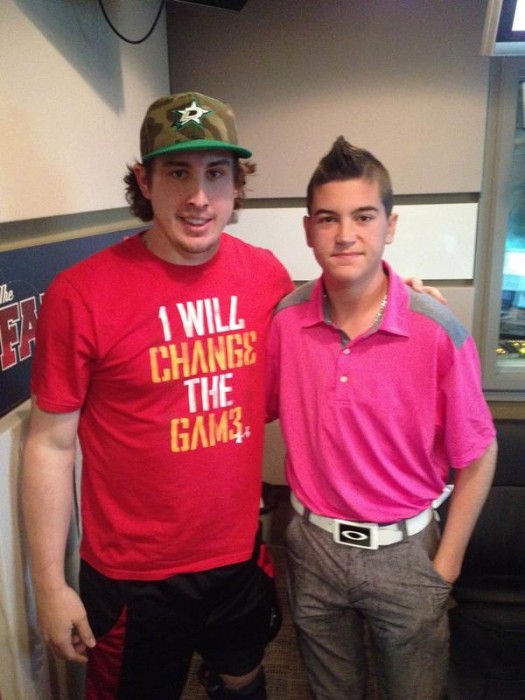 Just over 500 miles away, a young man is heroically battling for his life. He fights with a mental toughness that most of us can never imagine, his entire body slowly shutting itself down despite his best efforts. The fight has been going on for too long now, with minimal progress being made. The young man deserves a reprieve, and on this Tuesday, the game of baseball is a beautiful distraction.

X-linked hyper IgM syndrome is a rare immunodeficiency disorder only found in males. Those with IgM syndrome are very susceptible to infections, with their body having no way to fight over viruses, bacteria, and other pathogens. Any exposure to these things could prove to be fatal.

Despite being born with X-linked hyper IgM syndrome, Brooks Berry has spent his life thinking of others. Due to the unfortunate amount of time Berry has had to spend in children’s hospitals, he has had plenty of opportunity to work in the service of other sick children, learning their stories and bringing them hope every chance he got.

During his time at Cook Children’s Hospital in Fort Worth, Texas, Briggs Berry left a lasting impression on everyone he met. Briggs made his presence known, planning and designing a teen life room in the hospital, working as the patient ambassador to Children’s Miracle Network, and patient ambassador to the Texas Rangers, working to set up dates and times to have players stop in for meet and greets with the children staying in the hospital.

Briggs worked hard to maintain his health, stopping by Cook Children’s to receive monthly infusions and eventually getting to the point where he could administer them himself. He appreciated the freedom he began to achieve in his life, joining the golf team at Granbury High School, trying as hard as he could to live his life as a normal teenager.

As he began to understand how participating in everyday activities lifted his spirits, Briggs decided he needed to act to afford other children the same freedom. Berry founded Camp ID, which brings together kids with immunodeficiency to participate in normal camp activities; rock climbing, fishing, and hiking, all while sharing their stories in a form of support, learning from each other and finding hope.

Berry was awarded for his efforts, recognized as the 2012 Cook Children’s volunteer of the year (while being a patient there) and in 2013, he was chosen to be Children’s Miracle Network Hospitals Champion Child for the state of Texas. This gave Briggs an opportunity to travel to Florida and Washington, DC where he was able to meet President Obama.

Earlier this year, the legend of Briggs Berry took off when his story was picked up by ex-ESPN employees Ben Rogers and Jeff Wade of “Ben and Skin Show” fame, which currently airs on 105.3 The Fan in Dallas. These two, known for their entertaining yet passionate view on the Dallas/Ft. Worth sports scene, ran with the story, asking for their listeners, celebrities, and athletes to join Team Briggs and support the young man in his every day battles with IgM.

There is no way they could have even dreamed of the response they would get.

As they asked for others to support Briggs, athletes came out of the woodwork to lend a helping hand or thought of encouragement, first via social media, then in real life. Briggs began hearing from his heroes on a daily basis, receiving tweets from Bubba Watson, Rickie Fowler, Elvis Andrus, Mike Napoli, and Dez Bryant. As Ben and Skin continued to support Berry, constantly informing the public on his progress, more athletes joined in. Berry was visited by Clayton Kershaw, Dirk Nowitzki, and Tiger Woods, and was even treated to a night of sitting courtside with Mark Cuban at a Dallas Mavericks game.

Each of these visits and well-wishes provided a sense of joy and excitement, but none of them can compare to the true friendship offered by Derek Holland.

Following a call to action from Ben & Skin, Holland joined #TeamBriggs and began to visit the young man at the hospital, where they became ‘fast friends’. Holland began not just to frequently visit Berry, but also text and call, keeping in touch with Briggs and his family.

Before spring training, Holland was injured in a freak accident where his dog, Wrigley, clipped his leg and knocking him down a flight of stairs, causing a micro-fracture just below the knee and cartilage damage. The injury was supposed to result in a simple three month DL stint and rehab, but a number of setbacks extended his time away from the field to a little over seen months.

Although the constant setbacks were extremely frustrating to Holland, he found solace and a sense of perspective by remaining in contact with Berry, bearing witness to his everyday fight.

As Holland worked to become stronger, Berry’s body was gradually becoming weaker, with the combination of IgM and his body fighting to reject the transplanted marrow slowly becoming too much for him to handle. The pair got closer, and Holland told Evan P. Grant of The Dallas Morning News, “I want to be back on the mound, and that’s huge. But I want to do this for him, as well. I want to show him that not only is he fighting, but I’m fighting, too; we are both fighting together.”

As Berry’s body became weaker, he was moved into an isolation unit to prevent him from being exposed to any disease that his body would not be able to fight off. Holland then surprised him with a PlayStation 4, not only to fight the solitude, but also so Holland could continue to play games with him when Derek was at home or traveling with the Rangers.

As Holland prepared to return to the field, he suffered another small setback, this time back spasms from overwork in rehab. However, the pain in his back was nothing compared to the news he received just before leaving to make his first start of the year.

Just before departing to Kansas City, Holland was informed that Berry had taken a turn for the worse and was no longer able to breathe on his own. He was now on a ventilator and had minimal energy. Before leaving to meet up with the team, Holland stopped by Cook Children’s to visit, but Briggs was unable to wake. Berry’s mother ensured Holland that they would be watching, holding a viewing party in the hospital, as he took the mound and dedicated the game to his new friend.

On the night of September 2, Holland toed the rubber with a heavy heart and whirled an absolute gem in honor of his buddy. Briggs’ mother happily reported that her son was even able to crack a smile through the stress of the breathing tube when the television cameras zoomed in to show the young man’s name inscribed in silver on the side of Holland’s cleats. 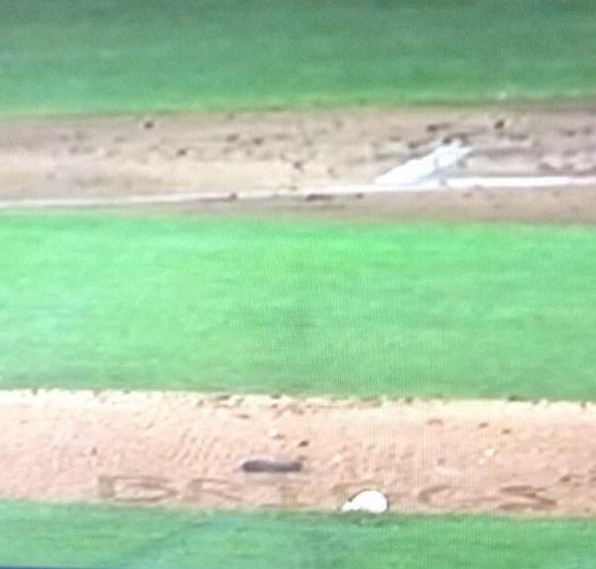 Derek Holland’s return to the mound has been an incredible success, posting quality starts in all five of his ventures to the rubber, each after taking a moment to write “Briggs” in the dirt before the first pitch. Holland is currently sporting a 1.31 ERA and according to Elias Sports Bureau became the first pitcher since 1900 to allow one or less earned runs with zero walks in his first four starts of the year.

Holland was winning his fight against the challenges his body had given him. Berry was slowly losing his.

Before his September 12 start against the Atlanta Braves, Derek Holland was informed that Berry may have less than 24 hours remaining. Holland once again took the mound with a heavy heart, etching “Briggs” into the dirt before the first pitch as the Rangers’ announcers informed the viewers of Briggs’ struggles, asking for additional thoughts and prayers. Holland was electrifying once again, allowing only one earned run over seven innings, providing the Berry family with a much needed mental and emotional pause.

On Saturday, September 13, Briggs Berry lost his eighteen-year long battle to X-linked hyper IgM syndrome. His legacy, however, will remain. Each of us dreams of living a life where we leave something behind, using our time on Earth to improve our surroundings, having a lasting effect on those we meet. Berry did that and more.

The legacy of Briggs Berry will remain not only through his work at Cook Children’s Hospital or through the 2,000 people who attended his memorial service, but through baseball.

Each time Derek Holland takes the mound, Briggs Berry will remain in his mind, and as Holland lives his life, the lessons Berry instilled in him will always remain. On Saturday, September 27, Holland will take the mound for the last time this season.

Briggs Berry will be there.

“Carve your name on hearts, not tombstones. A legacy is etched into the minds of others.” – Shannon L. Alder