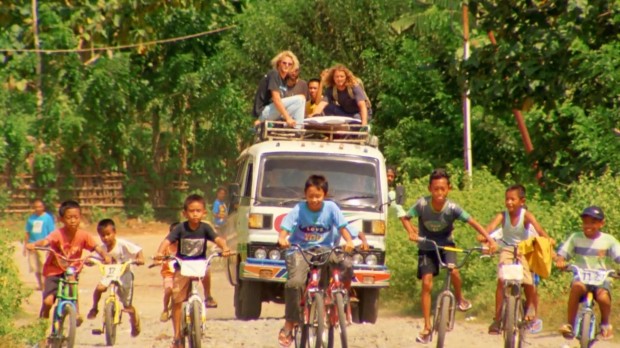 Joe G set out to discover the holy grail of surf spots. What he found was two years’ worth of untold adventure gold.

Packed with a roster of Globe’s team surfers, Strange Rumblings begins in the South of France as Dion Agius and Nate Tyler, along with Noa Deane and Yadin Nicol, are boosting airs right from the gate on a punchy French beach break.

From there Agius and Tyler are joined by the likes of Creed McTaggart, brothers CJ and Damien Hobgood, Brendon Gibbens, Nicol, Deane, and a cameo from Taj Burrow as they travel the globe looking for the mystical – and seemingly mythical – Shangri-La of surfing.

Filmed over the course of two years – and shot primarily on Kodak Super 16mm, Strange Rumblings takes place on a handful of continents stretching from vivid Mozambique to the stark landscape of Iceland, and from lush Brazil to tropical Indonesia and beyond. With still photography by recent Consider Collective feature subject D.J. Struntz, cinematography by Beren Hall, water cinematography from Rick Jakovich and editing from Rick Manzanilla, Globe’s latest adds up to one stunning adventure story.

Each section of the film reveals another spot on the map, and takes our surfing heroes carving across towering peaks, launching one air assault after another, to getting shacked in a barrel that never seems to end. Add in a surrounding landscape right from your dreams, a funky soundtrack, with a few international babes – c’mon, its a Globe film! – and we have ourselves an epic…well,  epic.

Embarking into the unexpected, Joe G & Co. lead the Globe surfers to where the destination is the journey. Shot in the style of a classic film, Strange Rumblings pays homage to legendary underwater explorer Jacques Cousteau and iconic filmmakers Bruce Brown, George Greenough, and Sonny Miller.

After Year Zero, we were spinning in circles until another visual explosion from Mr. G hit the screens. Just kidding on the spinning, but consider our minds blown.

If you haven’t yet picked up Strange Rumblings, here’s the link to score yourself a copy on iTunes.