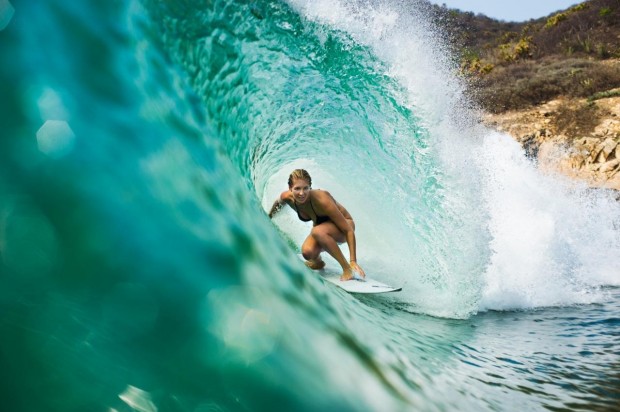 Film Review: ‘Stephanie In The Water’

In Ava Warbrick’s documentary Stephanie In The Water, the NYC-by-way-of-Australia filmmaker offers an intimate look into the meteoric rise of six-time women’s world surfing champion Stephanie Gilmore and the challenges that come with carrying the crown.

Early into the film, it’s mentioned that at a young point in her life Gilmore had spent more time in the water than out of it, and the rewards from hard work are earned quickly for the Australian, through clips from her surfing as an early teenager to winning her first world title in her rookie year in 2007 at 17 years old.

As a new movement began in women’s professional surfing, Gilmore’s fierce forehand carve and snap – with her effortless style and grace in and out of the water – made her a force right from the start.

Warbrick – directing her first feature film – caught Gilmore’s downtime with friends, family and her guitar, trailing ‘The Champ’ throughout her world travels, interviewing Gilmore and those in her inner circle, including shaper Darren Handley (also the shaper for three-time men’s world champ Mick Fanning) and Gilmore’s sister Whitney, who serves as her manager.

Having already won three consecutive world surfing titles by her 21st birthday, Gilmore locked up her fourth straight world title the following year and was seemingly on course for another dominant season until tragedy struck in December 2010.

She tearfully revisits the violent attack she suffered in the garage of her Tweed Heads apartment building, where a man attacked her with a crowbar, breaking her wrist and ending her season on tour – and with it, the string of consecutive world titles.

Shot on 16mm film, the film also boasts an original score by film scoring team Fall On Your Sword.

Stephanie In The Water shows how important ‘Happy Gilmore’ is to women’s surfing – Gilmore is already a legend-in-the-making at the age of 25 – and to the cultural landscape of the sport. The narrative, especially after Gilmore just scored her sixth world title this month at the Target Maui Pro at Honolua Bay, could not be more perfect: the champion, rising back to the top after the fall.

For more on ‘Stephanie In The Water’ or to watch the film, check out the film’s website.