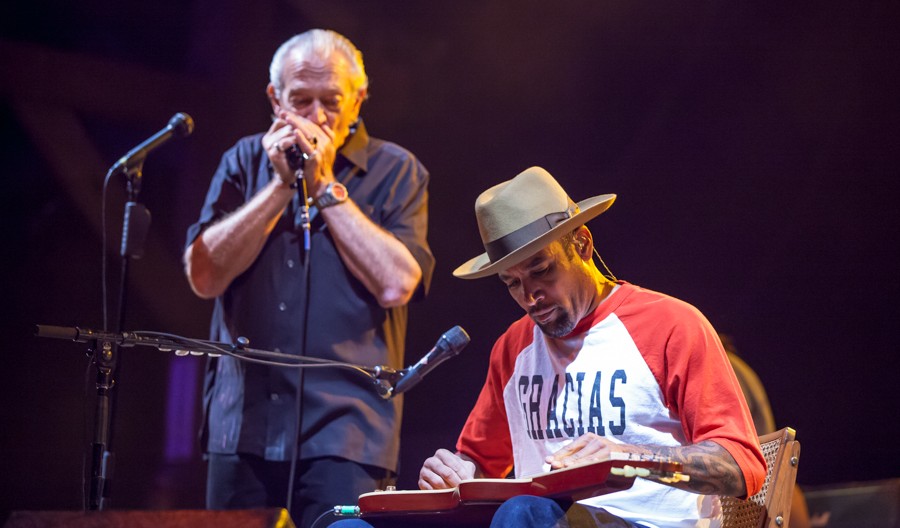 This year’s FloydFest officially kicked off on Wednesday afternoon with the with Deer Run Drifters and rolled onwards for five days packed full of music and arts, coming to a close in the wee Monday morning hours with The New Familiars and Hackensaw Boys closing out the festival around midnight. The days in between was a blur of world-class musicians, artists and vendors displaying their talents brought from around the globe.

Bolstered with mind-blowing performances from up-and-coming groups such as TAUK, The Floorboards, The London Souls, Major and the Monbacks, The Deadmen and Crystal Bright & the Silver Hands, this year’s FloydFest was indeed worthy of the chosen theme.

Officially the opening day of FloydFest, Wednesday gave festivalgoers a more intimate opportunity to see many of the up-and-coming musicians before the crowds arrived on Thursday and Friday. One of these acts was Crystal Bright & the Silver Hands, performing on the Pink Floyd Garden Stage that evening. Vocalist and multi-instrumentalist Bright calls Greensboro, NC home and she and her band performed an upbeat and entertaining set of music blended with gypsy jazz, cabaret, and ethnic music backed with grooves and stage theatrics.

Other acts playing on the first day of FloydFest were Paper Bird, The Deadmen, Deer Run Drifters, and The Get Right Band.

San Francisco musicians Michael Franti & Spearhead opened as the first of the festival’s headliners.Franti and his longtime band brought out a little sunshine, taking their Soulshine Tour to FloydFest’s Dreaming Creek Main Stage, jumping, dancing and shaking off a few raindrops to get the first official day of FloydFest underway. With a high-spirited set including the track “11:59” – entering the crowd with fellow vocalist Sonna Rele – and “Closer To You” from their new album All People, Franti & Spearhead got FloydFest’s second night off to a raucous start.

Tossing dozens of yellow beach balls into the crowd during Franti’s lead single “The Sound of Sunshine”, from their 2011 album of the same name, he and his band also performed “Hey Hey Hey” from that album, and later inviting a crowd of children onstage for “Life Is Better With You” from All People and the conclusion of their upbeat performance.

Nu-wop / soul group Major and the Monbacks, from Norfolk, Virginia, took over the Sugarlands Shine Speakeasy Stage that evening with a set overflowing with rock and nostalgic melodies. Donning matching sportcoats and endless energy, the group made sure the crowd kept on their dancing shoes with a rousing performance, taking us back to the 60s – well, at least from what we’ve heard from our parents and saw in Animal House.

Later that night on the Streamline Stage at Hill Holler, London Souls rocked the audience with their spirited funk rock well into the evening. The NYC trio got their start in 2008, entertaining FloydFest for the first time, with solid drumming by Chris St. Hillaire, bass work by Stu Mahan and vocalist/guitarist Tash Neal ripping off guitar solos from one of the coolest guitars we’ve ever seen, a multicolor Gibson Les Paul.

On the Dreaming Creek headlining stage The Duhks played the mid-afternoon set. Founded by Leonard Podolak and Jessee Havey, the Canadian fusion folk band blended high-spirited folk and soul with a dash of witty banter between songs, thrilling the crowd throughout their performance.

Up next was Groundation, the spirited roots-reggae band from Sonoma County, California. Led by vocalist/guitarist Harrison Stafford, the group was also founded by Marcus Urani (keys, b3) and Ryan Newman (bass).

TAUK, the NYC-based instrumental rock fusion group, touring behind their new album Collisions, made the Streamline Stage at Hill Holler feel like a New York hometown show, with their guitar-backed melodies from guitarist Matt Jalbert, bassist Charlie Dolan, keyboardist A.C. Carter and the ‘otherworldly’ – overheard by several festivalgoers – Isaac Teel on drums. The future keeps getting brighter for the group, as they made their consecutive return to FloydFest, playing a handful of sets to the amazed crowds. Check out our exclusive interview with TAUK here.

Ziggy Marley served as the evening’s headliner,and the “Love is My Religion” reggae star kept the Dreaming Creek crowd jamming to his original tunes – Marley is touring behind his new album Fly Rasta – as well as serving up several of his father Bob’s hit songs throughout his set.

After Marley’s performance, Thievery Corporation took it to another level on the Dreaming Creek stage. Touring behind their new album Saudade, the Washington, D.C.-based DJ legends – led by Rob Garza and Eric Hilton – brought out a collective stage of musicians in their energetic nighttime set.

On the Hill Holler Stage,FloydFest familiars Hackensaw Boys played their punk-infused traditional tunes before a packed hillside. Led by founding member David Sickmen on guitar and vocals, the Hackensaws returned to Floyd for a second consecutive year, and continue an East Coast touring run before heading to Europe in September.

Back at the Dreaming Creek Stage, JJ Grey & Mofro set the tone for a soul and rock-packed evening with a show that had the crowd on their feet, stomping and cheering for the rest of the night. Grey is based in Jacksonville, Florida and he and his band of melody makers made sure the audience felt right at home, as well.

After Grey’s performance was none other than blues legend Buddy Guy, now an effervescent 78 years of age, showing the headlining stage crowd a few guitar licks – as well as some wisdom from the road and his comedy chops – throughout his entire set.

Continuing with the headliners, Ben Harper & Charlie Musselwhite performing that night on the Dreaming Creek stage. The musicians first met while working together on John Lee Hooker‘s final album The Best of Friends in 1997, teamed up again in 2013 for their collaboration Get Up!, nabbing the duo a 2014 Grammy Award for Best Blues album. Harper, hailing from Claremont, California, and Musselwhite, a Chicago bluesman by way of Mississippi, thrilled the crowd well past midnight. Rocking the stage with everything from their Get Up! material – like the driving “I Don’t Believe A Word You Say” to a little Zeppelin (“When The Levee Breaks”) – Harper and his blues brother Musselwhite brought the blues for the people.

The final day of FloydFest 13 kicked off with some gospel and soul, with The Campbell Brothers beginning the day on the Dreaming Creek Main Stage with their Sacred Steel gospel music, followed by the Grammy Award-winning Carolina Chocolate Drops from Durham, NC – joined by founding member Justin Robinson – next on the docket.

The Floorboards kept the pace well into the evening, bringing their Southern rock and soul to the Sugarlands Shine Speakeasy Stage. Vocalist/guitarist Matt Browning‘s outfit, hailing from Roanoke, Virginia, performed tunes from their self-titled debut album as well as material they’re putting together for their follow-up release.

With such a slate of incredible musicians on the schedule – the weather seemingly far from anyone’s mind this year – what were festivalgoers pondering as they were leaving the grounds? If they were thinking like we were, they were counting down the days until FloydFest 14.