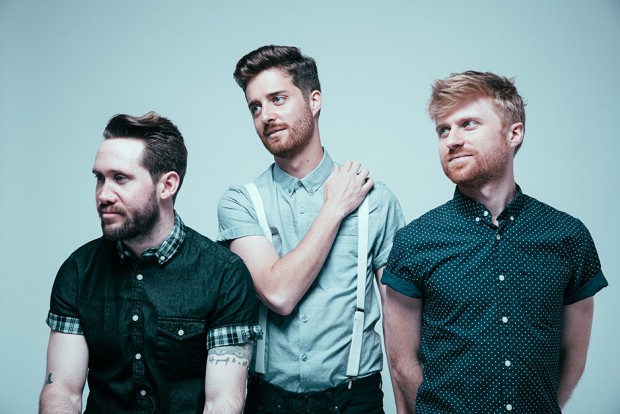 Ghost Stories From The Road: Jukebox The Ghost

As they return to their roots in Washington, D.C. this month, three-piece power pop band Jukebox The Ghost continues expanding their musical horizons, on a wide open road all their own.

“The biggest change for us was how we went about making the record,” says Ben Thornewill, pianist and lead vocalist of Jukebox The Ghost. “In the past, it would be getting the live arrangements together, then get the piano, the drums, the guitar parts down, then work everything else around it. This was the total opposite.”

Thornewill is breaking down the latest release – a self-titled effort – for the Brooklyn-via-Philadelphia-by-way-of-Washington, D.C. pop rock trio. He is also currently riding shotgun in the band’s tour van, where he speaks by phone as their tour manager mans the wheel, heading to a destination on their latest tour supporting the new record – a scene not too far removed from the group’s music video “The Great Unknown”, the lead single off the album.

“We came in with demos and deconstructed the songs,” he continues, “and broke them down, then built everything else around it. So spending hours on little drum parts or synth parts, then record the real instruments into the last week of a two-and-a-half month record-making process. In the process of doing that, we ended up growing as individuals and as a band in learning how to communicate with one another and re-focusing our goals on the record we wanted to make.”

While studying politics in 2003 (and later a music major) at George Washington University, the Louisville, KY native met Tommy Siegel (guitar and vocals), a Journalism major from Richmond, VA, and Jesse Kristin (drums), of Boston, majoring in Biology. The three connected over pop music, and began pursuing their musical passion together. Playing house parties and benefit gigs in the D.C. area has given way to worldwide touring these days. The group resonated early on with listeners for creating anthemic piano-driven pop music dealing with topics from the highs and lows of life, love and death – no matter the subject matter – with the same manner: celebrating the moment with a soaring positive energy.

They released their first album Let Live and Let Ghosts, in 2008, and a second album, Everything Under the Sun, two years later. In 2012, JTG released Safe Travels, a blend of spirited ballads and slower songs inspired mainly from real life experiences. In late 2013, the group entered the studio with over 50 songs and tackled the challenge of selecting the best 11 for their self-titled record, released last October by Yep Roc Records.

“It’s the worst,” Thornewill admits with laughter, when asked about the process of culling that many songs in making the album. “It’s terrible! You put your heart and soul into pretty much every song, trying to figure out what fits and what doesn’t. It was a process. We had twelve decided, and one of them we just couldn’t fit into the record. That was one of my songs – it was really hard for me. At the end of the day, if a song doesn’t make it on a record, there’s a reason. Stylistically, aesthetically, whatever it happens to be, and there’s always a next record to put it on. That process is real hard.”

What made it on the record was the most complete Jukebox The Ghost record to date: self-reflection, observations from experiences high and low in the manner of ambitious piano- and guitar-led pop songs, from melodic ballads to down-tempo numbers.

“With the song selection, and the sort of songs we’re writing,” Thornewill says, “we stand by every song, and the work we put into arranging it, and the selection of it. I can assure you that no vocal part or written part went unexamined. Everything is very conscious on this record.”

On the new album, Thornewill and Siegel continued in sharing the songwriting duties. Thornewill writes most of his songs using the piano, and Siegel by way of guitar. Thornewill offers that the years of being together has strengthened the group dynamic when it comes to songwriting, leaving egos at the door. “You know, it’s gotten really amazing,” he admits. “We’re at a point now where we can bring in a song, and if a part isn’t working, we’re able to say that to one another and not get our feelings hurt. That makes a big difference in putting together the best songs.

“From a compositional standpoint, a song written on piano and a song written on guitar is gonna have different qualities, just by the nature of the instrument. A lot of the process in this record was sort of [the band thinking], ‘What if we made this piano song more of a guitar song?’ or ‘made this guitar song more of a piano song?’ Those are the conversations we had in trying to keep the songs fresh and relevant.”

Fresh and relevant could also describe the recording process, which found them leaving their East Coast digs in Brooklyn and making the record in Los Angeles. Did sunny L.A. offer any less pressure for the group during recording? “Well, no, but the weather was nice. I’ll give you that,” Thornewill offers with a laugh. “We were there in March of last year, and some of the worst winters New York had ever had, so waking up to a sunny day everyday, that was okay. Definitely helped keep our spirits up and made the hard days less hard.”

Thornewill and Siegel spent time away from the group working on several of the new songs individually and with additional songwriters. Thornewill worked with friend and fellow songwriter Greg Holden on super-catchy “The Great Unknown” while on a break away from recording. While making this record was much more collaborative than their previous work, Thornewill says stepping outside the normal bounds of recording ended up giving the band a fresh perspective in the studio. Another new change in the band’s mindset for the record was featuring Kristin’s vocals during the intro and verses on “Hollywood”, the surprise track of the album.

“Within the band, it was incredibly rewarding working with Tommy and Jesse and really be able to really get collaborative, critical and creative with one another. Writing outside the band, when you work with other people, you bring their talents in and you get a new perspective. It opens up a whole world of writing and takes some of the pressure off.

““The Great Unknown” I wrote with one of my best friends, and it was never, ‘Hey, let’s write a Jukebox The Ghost song’, it was, ‘Let’s sit down, let’s just hang out today and write a song. See what happens.’  That’s what we did and that’s the song we ended up with. At the end of the day, it was, ‘Hey, that should really go on our record’. It’s a beautiful thing. Working with other people, you learn new things and new tricks. Both Tommy and I are better songwriters, not because we were writing with other people, but because we write with other people.”

As the group’s songwriting continues developing with each new album, and is a process Thornewill says remains organic. “You know, every song is a unique piece,” says Thornewill. “There are ways to force creativity or rearrange creativity, but changing the way you write can be really important. Some of this record was written on synthesizers and pianos, some were conceptual, and I think keeping your process fresh – keeping the way you create ideas, create sounds, create songs – keeps you creative. It keeps you writing songs. When you write the same thing, the same way over and over again, all the songs sound the same. That’s not what you wanted to do.”

For a group that tours on average 150 shows a year, Jukebox The Ghost maintains their infectious energy night after night in bringing songs old and new to the masses. “You love all your children the same,” muses Thornewill, “but you like some of them more than the other. The old material, it takes on a new life in the context of the new material. We’re obviously excited to be playing songs that we hadn’t played as much.

“On this tour that we’re on right now, we’re looking at a really old song, and the contrast between that and the new stuff. It makes it feel really fresh and exciting. It makes the new song really exciting as well. Songs come in and out of fashion, and every time you play it, it’s different. New audiences also breathe new life into songs. We stand by the songs we’ve written. While we get tired of playing some songs more than others, we always enjoy playing them.”

So how does a group with such a rigorous touring slate unwind from it all? “I still don’t know how we do it,” Thornewill admits, laughing. “We’ve just started getting going [on tour]…I’ve killed a few people, that really helps me take the edge off,” he jokes, “but nothing more dramatic than that. You try to find your space. I try to get breakfast alone,” he continues, with a laugh. “Give me an hour at Denny’s at the start of the day and I’m a happy person.”

As this leg of their current North American Tour arrives to its conclusion this month at the famed 9:30 Club in Washington, D.C., Jukebox The Ghost returns to the city where the group first looked out on and embarked upon their own great unknown. Another album recorded, another path crisscrossing the country, leading right back to home. Hoping for more jovial humor from the humble and affable frontman – and not expecting anything classified from the archives of touring – I ask Thornewill for any wisdom imparted from fellow musicians or from within, that comes from the better part of six-plus years – over 800 shows – of living away from home, out there on the road.

“Most of the lessons I’ve learned from other bands are things that I’m not even willing to put into an interview,” Thornewill says, laughing. “The stuff you do to survive on tour…it’s gnarly living out of a van for months at a time. I think this is true about life, but finding ways to stay happy, engaged, and keep learning – staying happy, staying true to yourself – that permeates, whether you’re home or on tour. That helps you stay sane. I don’t drink much on tour, and I have a lot more fun. You gotta figure out what makes you happy in life, and see that through.”