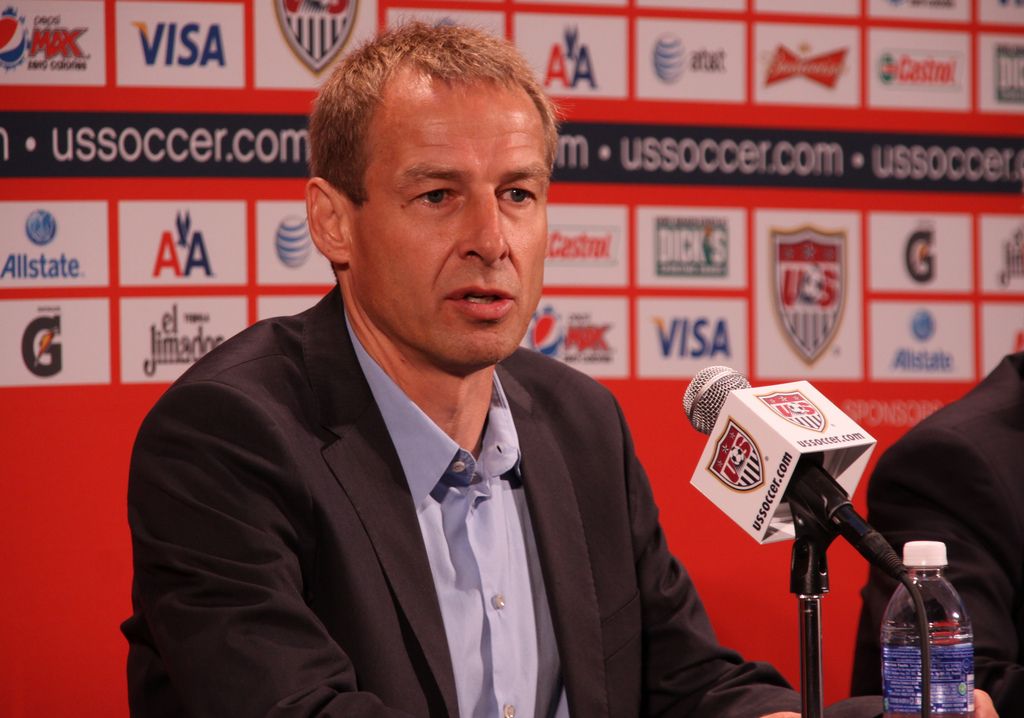 Is Jurgen Klinsmann The Savior of U.S. Soccer?

Is Jurgen Klinsmann the savior for United States soccer? Many Americans, think that Klinsmann, the U.S. Men’s National Team soccer head coach, may be bad for U.S. soccer. I feel just the opposite; he is a positive influence for U.S. soccer and is just what it needs.

Soccer is low on the totem pole when it comes to popularity among the predominant American sports. Although the MLS is growing and handfuls of high-profile international players are coming over to play in the MLS, we just don’t give much thought or much attention to soccer as we do to American football, basketball or baseball. However, globally, soccer is the most popular sport in the world.

Let’s face the facts, America: We need his international and World Cup experience and we needed it brought to the States, big time! Especially if we want to keep up and compete with other countries on the world level. Klinsmann has found experience and success at the international and highest professional levels as both player and coach. From his 1990 World Cup win as a player on the German national team to his 3rd place finish in the 2006 FIFA World Cup coaching Germany, which, like the 2014 U.S. Squad, was a young and relatively inexperienced side.

During his tenure as Germany’s head coach Klinsmann was criticized for his coaching style and some of the decisions he made, similar to the criticism with some of the recent decisions he’s made in the lineup and formations with the U.S. team. I say let’s listen to the guy (it’s worked so far; he holds a 32-11 record as the U.S. manager since taking over from Bob Bradley in 2011) and see what happens, before we start with wanting to sack him. He took the young 2006 German squad, which no one expected much from, deep into the World Cup. They ended up winning all three of their group games, eventually defeating Portugal 3-1 in the 3rd place playoff game to finish 3rd in the tournament. This performance silenced the critics and, in fact the victory triggered a celebration, where Klinsmann and the team were honored the following day with a parade in Berlin.

So for all we know, he could be a soccer genius. Hell, I wish I knew. What I do know is that he has my full trust to change, improve and develop U.S. soccer. Only time will tell if he can or not. I truly believe that he can turn U.S. soccer around and make them competitive and successful in the future. So with all that being said, let’s ease off a bit with the vitriol, America. With his vast knowledge and experience he brings to the table, he should be able to improve U.S. soccer to become a more competitive and successful national team.

Klinsmann’s decision on which players fill the roster is in question amongst many U.S. supporters. Beginning with adding defender John Brooks last August and forward Julian Green this March, moves making both eligible to play for the U.S. in the World Cup. With Brooks’ goal in the closing minutes of the Yanks’ statement victory over Ghana in the WC opener, Klinsmann’s belief in Brooks paid off, securing the win. I also strongly believe the Green move was brilliant. Green is only 19 but I believe he will develop into a great player for the U.S. and Klinsmann fully believes Green is a key member of the U.S. squad’s future. With Green’s raw talent, great potential and quickness on the pitch, I feel that he’s a player Klinsmann can mold and shape into a superstar and possibly turn him into the face of U.S. soccer. I’m excited about the kid. I really hope he develops into a great player and dominates, but again, only time will tell. Both players have grown and developed in the youth system Klinsmann has continued improving since taking over the USMNT, and one hopes future players will continue on similar paths to success.

Now some may ask, why give a roster spot – maybe Landon’s – to a very young, relatively unknown player (Green) when he could have kept U.S. soccer’s heart and soul for many many years on the roster instead? Well, I don’t know, either. Was I happy that Landon was left off the roster? No, but again, we need to trust Klinsmann. Do I wish Landon was on the roster? Yes, of course but again I feel that it was the right move for U.S. soccer. I know we are quick to criticize because it’s what we as Americans like to do, but we just need to go with it.

I’m very excited and look forward to our match this Sunday against Portugal. Cristiano Ronaldo always poses matchup challenges and they will hungry for a win after their 4-0 shellacking at the hands of Germany. I’m optimistic we can take our group by storm and shake things up a bit. At least show some signs that U.S. soccer is moving forward and progressing. And I believe that it will, we just need to have a little faith in Klinsmann. So get your vuvuzelas out, get pumped and tune in to the matches. USA! USA! USA!