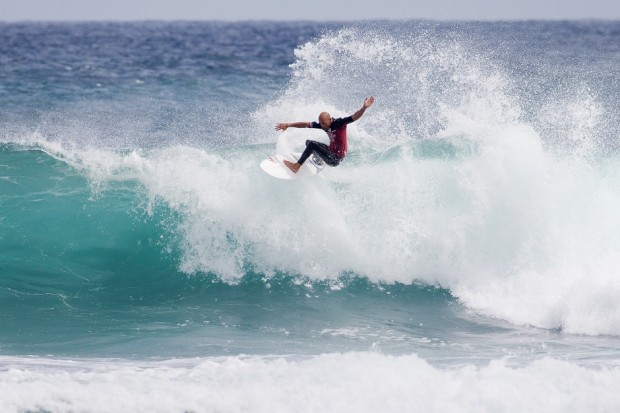 The World Surf League’s (WSL) Men’s Top 34 are back at the rolling right-hander of Supertubes at Jeffreys Bay, South Africa for the J-Bay Open 2015, stop number six on the WSL Championship Tour (CT) slate. Last year’s champ Mick Fanning (AUS) is off to a quick start, using his powerful turns and rail game in moving through the first round to Round 3. Americans (and Floridians) Kelly Slater and C.J. Hobgood won their opening heats, as well as Dane Reynolds (USA; in an intriguing wildcard role), Kolohe Andino (USA), Michel Bourez (PYF; back from missing the past two contests from a foot injury), Freddy Patachia, Jr (HAW), and tour rookie Keanu Asing (HAW). All winning surfers move past the second round into Round 3.

Fellow Australians Julian Wilson, Josh Kerr, Ace Buchan, and Bede Durbidge won their respective first heats at J-Bay, but the local star was not so lucky; Jordy Smith (ZAF), returning from injury, was knocked out by Durbidge (AUS) in their respective opening heat. Event #5 winner Owen Wright (AUS) also came up a bit short in his opening heat to Hobgood and will head into Round 2.

Swell has been on and off the past few days at Supertubes, as Surfline predicts lighter wind waves from the south, diminishing into the weekend and start of next week, with swell in the 5-6 foot range.

The J-Bay Open 2015 has a waiting period of July 8 to July 19, 2015. Follow along and watch the live webcast on WorldSurfLeague.com.