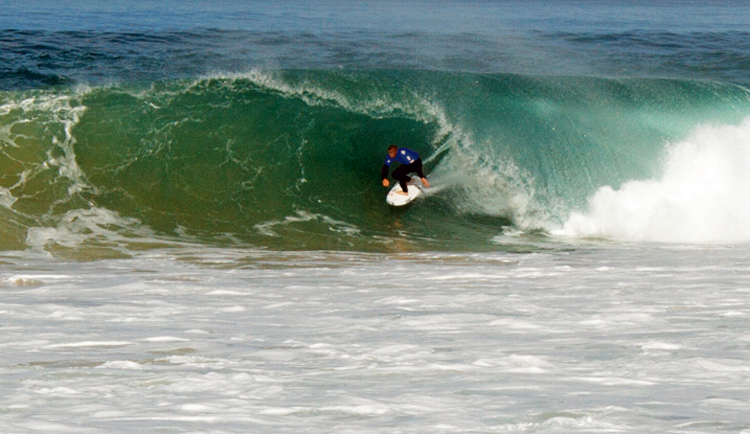 Mick Fanning moved closer to defending his world surfing title, as the 3x world champ captured victory over close friend Joel Parkinson in an all-Australian final at the J-Bay Open, the sixth event on the 2014 ASP World Championship Tour.

In double overhead waves at Supertubes, two-time J-Bay winner Fanning opened the final with a 9-point ride, taking an early lead in the heat, one of the four he surfed on the final day. With both surfers growing up on right-hand pointbreaks, Fanning and Parkinson traded waves throughout, yet it was Fanning’s opening wave that made the difference in the end, as he topped the 2009 world champion Parkinson, 17 points to 13.60. Fanning has now taken the title three times at J-Bay, and

“I’m just stoked, it was such an incredible day of waves and I’m just so thankful that I got to surf it,” Fanning told the ASP’s Rosy Hodge after the final with Parko was decided. Fanning now has won two contests this year, and finds himself right back in the thick of this year’s title race just past the halfway point of the year.

“I just gotta keep working,” Fanning said, in regards to pursuing his 4th world title. “I’m sure I’ll wake up tomorrow and start thinking about it,” he continued, adding a laugh.

With the ASP World Championship Tour’s first return to Jeffreys Bay, South Africa since 2010, Mother Nature greeted the Top 34 with superb waves throughout the event, save for a handful of lay days before the quarterfinals.

Earlier in the contest, Parkinson and fellow Aussie Matt Wilkinson squared off in the first semifinal, with Parkinson’s power carves and a 10-point ride sealing the win over a motivated Wilkinson, 18.83 to 15.54. Wilkinson had taken down both Kelly Slater and Taj Burrow with his backhand attack earlier in the event. With the quarterfinal finish Wilko’s best so far into the 2014 season, he jumps 12 spots in the rankings to No. 21, and gives him added momentum to finish out the year in the Top 34. Fanning won his semifinal over fellow Australian Owen Wright, with a score of 17 to 12.50. Australians claimed the final four spots in the event.

With the results at J-Bay, the world rankings have shifted around towards the top. Brazilian Gabriel Medina, with his fifth-place finish at J-Bay, remains locked in at the Number 1 spot, trailed by Parkinson (previously 5th) and Fanning, previously 8th. Burrow and Michel Bourez complete the top 5. With his early exit to Wilko in the first round, Kelly Slater dropped three spots to No. 6 in the rankings.

In the inaugural ASP Heritage Series event, a pair of J-Bay legends faced one another as 3x world champ Tom Curren and his slicing forehand approach topped his longtime Aussie foil Mark Occhilupo’s fierce backhand at Supertubes. In the heat against former world champ Occy, the 50-year old stylemaster Curren weaved through a pair of long barrels, reminding those in attendance (and watching the broadcast) of his Rip Curl Search days, claiming a perfect 10 on a handful of carves then shooting through the tube section, in thwarting his former rival on the world tour.

Next up on the ASP World Tour slate is the Billabong Pro in Tahiti. The contest is set to run from August 15-26 at the left-hand reef break of Teahupoo.