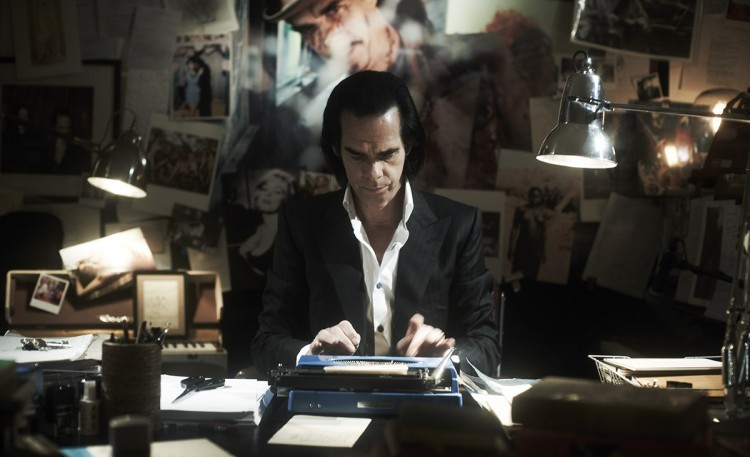 Nick Cave is offering up a 24-hour look into his mind – and we can’t wait to see what’s inside.

In 2013, as he was finishing Push The Sky Away, his 15th studio album with the Bad Seeds, Cave figured out he’d been living on this world right around twenty thousand days. Twenty thousand days equals out to fifty-five years. Ruminating on his life thus far, the post-punk luminary put these thoughts to paper in his songwriting notebook.

Those thoughts were taken and composed into the autobiographical film 20,000 Days On Earth – labeled a ‘drama-documentary’ – peering into the mind of the international man of mystery and intrigue.

There are few – if any – quite like Cave, who has mastered the seemingly impossible act of tailoring the roles of outlaw, rock star, film composer and artist-scribe into that of a larger-than-life cultural icon, furthermore one widely respected by worldwide music and film audiences for going on two decades. Best known for his musical work with the Bad Seeds and Grinderman, Cave is also an accomplished author, screenwriter, composer and actor. His unmistakable baritone is as seamless in surf flicks as it is on Hollywood movie screens. Cave’s screenwriting and score compositions have a knack for the dark and mysterious (Lawless, The Road, The Proposition) and walk the line between morality and justice-at-all-costs, found between the shadows and the light. While artistic in its flair, his work remains approachable to listeners and moviegoers alike.

Premiering at Sundance, 20,000 Days captured two awards at the festival – the Editing and Directing Awards in the World Cinema Documentary category.

Consider Collective is pleased to bring you the first trailer for 20,000 Days On Earth, which will begin screening in the U.S. later this month.

Sign up for news and updates on 20,000 Days On Earth and for tickets and worldwide screening dates click here.