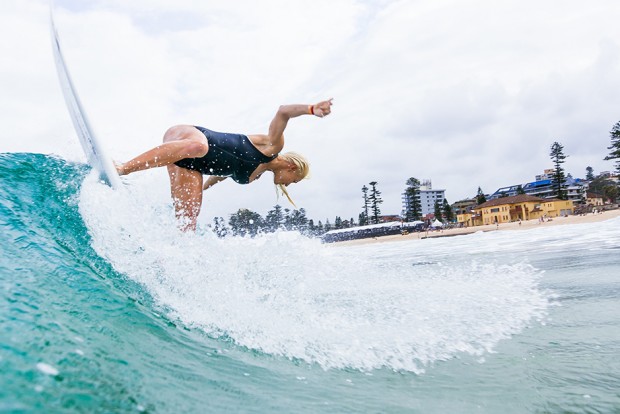 Tatiana Weston-Webb: The Future Is Now

As she embarks upon her rookie year on the Women’s World Championship Tour, pro surfer Tatiana Weston-Webb is determined to keep winning on the highest level of her sport.

Tatiana Weston-Webb, 18, was born in Brazil yet hails from the Hawaiian island of Kaua’i, where she learned how to surf world-class waves from her brother, Troy, around the age of 8. Weston-Webb focused on playing soccer for several years, before the pull of surfing reclaimed the young Hawaiian for good.

Inspired early on with competing in the Annual Irons Brothers Pine Trees Classic on Kaua’i, Weston-Webb’s determination to win knew no bounds. The fearless goofy-footer made the podium her home, winning multiple amateur surfing titles, Rip Curl Grom Search championships, and US National championships, as well as the Junior Pipe Pro, as she rose through the ranks of surfing. Tatiana also won the ISA World Junior Surfing Championships twice, in 2013 and 2014, while competing on the Women’s Qualifying Series (WQS), one level below the Women’s World Championship Tour (WCT), the elite league of women’s professional surfing.

In 2014, she won two WQS events and as the WCT injury wildcard replacement, she competed – and won heats – in three WCT events, but still needed a statement on the ‘QS for a chance to qualify for the ‘CT in 2015.

That opportunity came with Weston-Webb winning the make-or-break final over fellow Hawaiian Alessa Quizon in the Mahalo Surf Festival at Itacaré, Bahia, Brazil – the last ‘QS event of the season – earning her a place on the ‘CT. As the lone rookie on tour this year, Tatiana started her 2015 campaign on a roll – with a pair of top 3 finishes in her first two ‘QS events and just secured a place in Round 3 at the Roxy Pro Gold Coast at Snapper Rocks in Queensland, Australia this week with a second round win over last year’s event runner-up Bianca Buitendag (ZAF).

Skilled in all wave conditions, Weston-Webb is a tenacious competitor with a focus and talent that’s meant for winning on the grandest stage of surfing. We caught up with Tatiana between the Australian Open of Surfing and the Roxy Pro, where she took time out to talk about making the World Tour, her family as inspiration and love of Kaua’i, her expectations on the tour, and of course, her drive to win a World Title.

First off, congratulations on qualifying for the ‘CT this year. How has your mindset changed from your win at Bahia?

Thank you. My mindset has changed a lot because now I’m surfing with the elite. Now I have to work that much harder and surf that much better because that’s the only way I’ll beat the best surfers.

As a competitor, you definitely seem to have fun on tour. How are you preparing for your first season on the ‘CT? Have you taken any new approaches (surfing, training, waves) that you may not have done before on the ‘QS?

Yes, I try to have a lot of fun because I feel like if I don’t, I will burn out quickly. I have such a passion for surfing and I never want that to go away. I believe if people overwork or overthink everything then they will eventually move on and that’s definitely not what I want to do with surfing. I haven’t really taken different approaches to my training or surfing yet. Of course, I always study my surfing and I keep doing my basic training routines, but the only thing that I’m trying to do differently is stretch a lot more and surf more. I’m also trying a lot more variety of maneuvers.

From your early days in surfing – and in your time away playing soccer before returning – what was the moment where you wanted to become a pro surfer?

There were times when I wanted to skip soccer practice just to go surf, because after soccer I would only have 30 minutes of daylight to surf and that was never enough for me. So it came to a point where my Mom asked me, ‘What would you like to do, surf or play soccer?’ So I said, ‘All I want to do is surf,’ and ever since then I’ve become addicted and haven’t stopped. 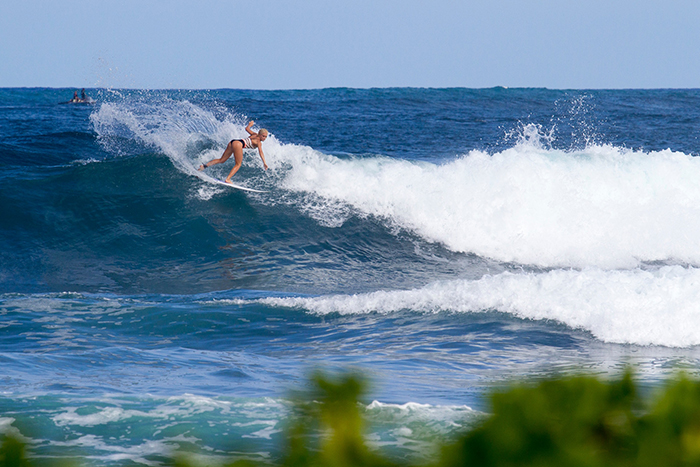 Recently I interviewed Damien Hobgood and he said that today’s surfers need to master it all; from barrels to aerials, and everything in between. Growing up on Kaua’i, with such a variety of waves around you, you can charge everything from Bells to Pipe and big Cloudbreak, possess a solid backhand and can bring out the airs, too. What is the next progression for your surfing?

Thank you. Yes, Kaua’i is the most amazing training ground ever, and I’m so lucky to have grown up on that island. My next progression for surfing would probably have to be getting my airs and my backside barrel riding on point.

You’ve mentioned the Irons brothers have both been huge inspirations for you growing up. Andy charged like no other and Bruce is one of a kind. How have they inspired your surfing as well as giving back to Kaua’i?

Bruce and Andy Irons are always idols in Kaua’i. They would hold their Annual Irons Brothers contest [at Pine Trees] and people would even fly from the outer islands to do it. People were inspired by them because of their fluid styles and like you said, their progression of doing every maneuver on point. Andy had the most amazing style on the world and to this day I still think he was the best surfer ever. Bruce was just recently at Teahupoo, and I was lucky enough to be there watching him. He got the best barrels I’ve ever seen, and it was incredible. I think the Irons brothers give back to Kaua’i by being who they were and are – just ridiculously amazing surfers.

How instrumental have your family and friends been with your surfing success and focus in/out of the water?

My family is definitely the reason I am where am today. They’re the closest people to me and so supportive no matter what, even through all my ups and downs they will always be there at the end of the day to tell me how proud they are of me. I couldn’t ask for a better group of friends, that are always so supportive, too. Being on tour or doing WQS events is a real grind some times and to have your friends always there to fall back on in a time of need is just amazing. Just wanted to say thank you to all my friends and family for all of your continuous love and support. I wouldn’t have done it without you guys.

You more than held your own against the ‘CT in 2014. How has your success in the events/heats against the girls on tour last year get you ready for 2015?

Being the injury wildcard last year in three events on the WCT really helped a lot because I actually made heats. I felt as though I proved that I should be there. So that was all the more confidence I had going into the ‘QS events and competing at my best to make it on the world tour. Having a taste of the World Tour, and not actually being on it made me want it that much more, so it was the best experience I could’ve ever received. 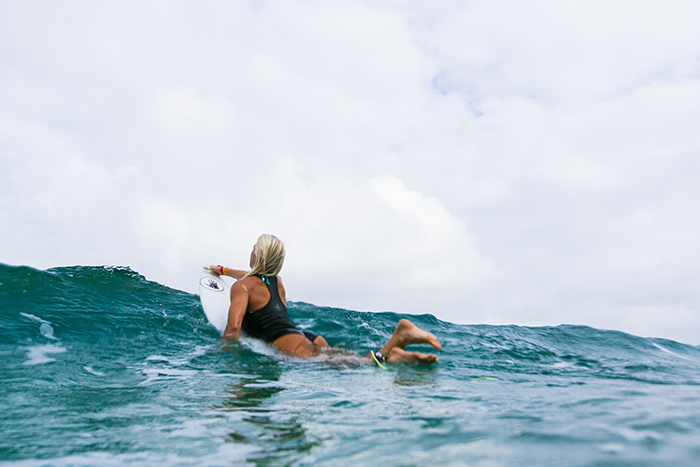 Tatiana Weston-Webb, paddling for the peak.

Which waves are you most looking forward to on the ‘CT?

I’m actually looking forward to bells because it’s such an iconic venue, and I’ve actually won the International RipCurl Grom Search there twice. I feel like I have experience there and I feel I am strong on my backend so I can’t wait to compete there. I’m also really looking forward to Fiji because it’s one of the most incredible lefts in the world.

Now that you have reached the top level in women’s surfing, what are your overall goals for the sport and to keep it progressing?

My goal for the sport of surfing is to progress each day and continue my love for it. Of course, someday I’d love to win a world title but that comes with time, practice, and determination. I have all three of those, so we’ll see!