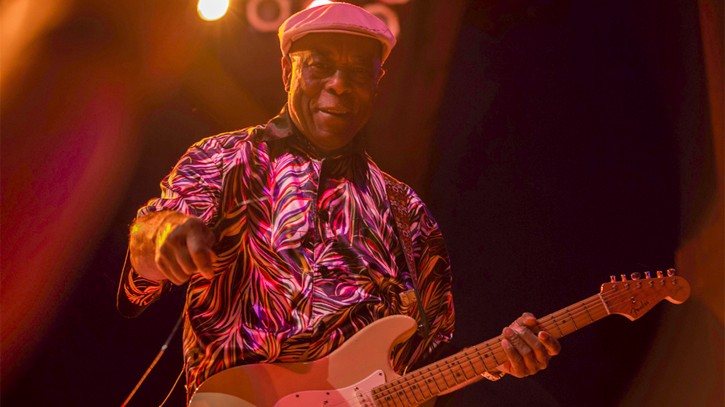 Buddy Guy and The String

Besides seeing new and favorite bands and musicians in a more relaxed atmosphere than a standard venue, music festivals are packed with opportunities for the typical festivalgoer: sharing life-changing experiences and events with friends and new people from across the world and from all walks of life. At this year’s FloydFest, a world music & arts festival held in Floyd, Virginia, that was no different. Captured in words and photographs by Hilton Head Island, SC-based photographer Eric Rayburn, here is the story of how blues legend Buddy Guy – along with a fellow festivalgoer in the crowd – gave one of his fans a moment to remember for life.

The rail is an interesting place.

That little piece of metal, wood or plastic in front of the stage attracts a certain type of person. And even though they may be different from the casual concertgoer, there are predominantly two types of people usually found in the front row at concert venues around the world.

Some find themselves there either by chance or simply because they enjoy the excitement of seeing the performer up close. But the others are the most fervent, most hardcore fans. They gather there right after the doors open to secure spots for the music to come. These spaces upfront are guarded and rarely given away. These fans who “ride the rail” tend to know all of the words to all of the songs from all of the albums. They generally dance, jump and scream a little bit harder than the rest in attendance.

When 78-year-old blues legend and 6-time Grammy winner Buddy Guy played Floydfest 13, in the mountains outside of Floyd, Virginia on July 26, there was one such man. He was right up front, just to the right of center. In his late 30s-early 40s, he was a little heavyset, with short hair and a goatee. He and his wife were from Asheville, NC and they were excited for the show.

“The other people at the festival are cool,” he said. “But this…,” he continued, pointing at the stage, “This is the show for me.” As the lights came up and the show began, he was yelling loudly and singing along, dancing and smiling. A photographer had been standing behind the man and asked him during the second song if he could come forward onto the rail to take some pictures.

Without missing a beat he responded, “Sure man, do your thing!” The photographer slid forward and raised his camera, while the man moved backwards a few steps and placed his wife in front of him. The show continued with Guy telling humorous stories filled with risqué references and throwing down the Chicago blues perfected in the band for Muddy Waters and at Chess Records. During the fourth song, while in the midst of a furious riff, Guy broke his high E string. Not uncommon for guitarists, but Guy’s reaction was dramatic and exaggerated, drawing screams from the audience. Guy continued to play, using the broken string as a bow and finally just striking the other strings with it. He took the string and held it out, rolling it up and he threw it into the audience. Everyone in the general direction he threw reached up to catch it, but no one saw where the string went. Guy got a new guitar and the song went on. 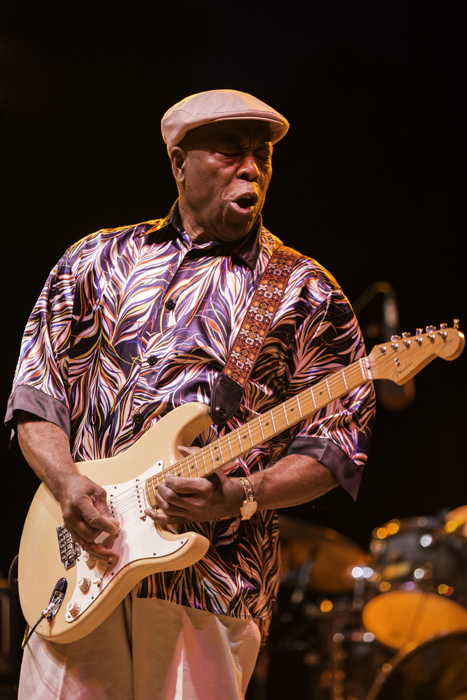 There was a young blonde woman, maybe 24 years old, who was standing along the rail about 3 people to the right of the photographer. This was her first time seeing Guy and she was dancing and smiling but not singing along much. She was simply enjoying the music. About a minute after Guy got a new guitar she turned around and put her right hand out toward the man. He looked at her inquisitively. She opened her hand and there was the broken, coiled-up E string.

The man smiled and said, “That’s awesome you got it!”
The girl lifted her hand slightly saying “You take it.”
“No, you caught it,” he replied.
“But he’s your favorite!” she said, insisting. “Take it.”

She placed it in his hand, turned around and continued watching the show. The man stood there and just stared at his hand and the gift he just received. His wife rubbed his arm and smiled. His feet were rooted to the ground. He couldn’t move. He just turned and looked at the photographer, the person to whom he had given his space at the rail. And the man began crying. Tears flowed down the outsides of both cheeks.

“Thank you,” he yelled to the young woman. She never heard him. The photographer placed his hand on the man’s shoulder. “Wow, that was really cool,” he said. “That made my festival to see that. Thanks.”

He clenched his hand, holding a sure to be treasured prize, and looked around. There were a group of people who had seen what had just occurred. They were all staring at him, not saying anything. In the middle of a blues concert, this act by one music fan to another, had silenced a group of 15-20 people.

The people around him began slapping him on the back and cheering, but not for the musicians on the stage. They were cheering for an act of selflessness shown and happiness given.

It’s the music that brings these people together. These people who share a common feeling about simple notes from a guitar or a banjo. All of these people, from all walks of life, sharing an experience together.

Music festivals have proliferated since the days of Woodstock. On any given weekend during the summer, a gathering can be found highlighting every type of music from EDM to bluegrass. They range in size from a few hundred to almost a hundred thousand in the case of Bonnaroo and Coachella. They can be as cheap as $50 for admission and camping to $2,000 for the full VIP treatment. But because of the like-mindedness and passion for music these fans collectively share, even in the midst of tens of thousands of different people you can find two music-lovers sharing a very special moment. A casual fan and a long-time follower.