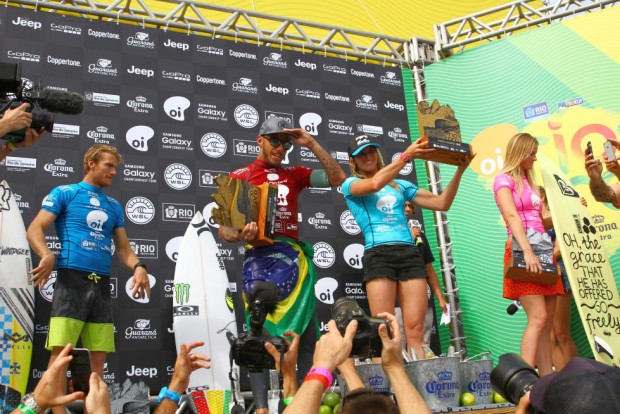 The “Brazilian Storm” shows no signs of letting up in pro surfing this year, only gaining momentum at the Oi Rio Pro in Barra da Tijuca, Rio de Janeiro. With Gabriel Medina winning the world title last year, Adriano de Souza currently leading the Men’s Championship Tour (CT), and now Filipe Toledo throwing his name into the ring as a World Title contender, the contingent of Brazilian surfers taking over on the world surfing stage keeps building steam as the CT heads into the heart of the tour year.

On the fourth stop of the 2015 Samsung Galaxy World Surf League (WSL) CT, Brazilian aerialist Filipe Toledo took to the air in front of a packed beach crowd on his home turf – with millions more watching on Brazilian TV – winning the Men’s final (and his second CT event) over longtime tour veteran Bede Durbidge. In the Women’s final, Californian regular footer Courtney Conlogue continues her chase of tour leader Carissa Moore as she wins her second contest in a row over Bianca Buitendag of South Africa. 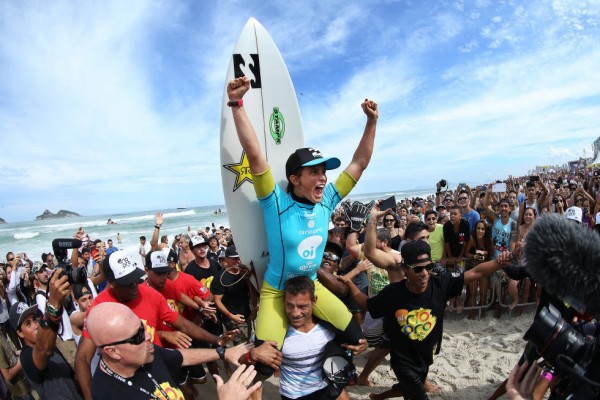 In the Women’s final, Conlogue secured the early lead and continued her winning ways in 2015 to defeat Bianca Buitendag (ZAF). As conditions were fading throughout the day to three-to-four foot surf, Conlogue jumped out to an early lead, building her two wave total with scores of 7.17 and 7.33. Buitendag found a few waves late – building a 4.83 and a 6.27 – though couldn’t overcome Conlogue, losing 14.5o to 11.10. With her second win in a row this year, Conlogue solidifies second place just behind Moore heading into the Fiji Women’s Pro later this month.

After the Women’s contest was decided, the Men’s final pitted heavily-favored countryman Filipe Toledo against Australian regularfoot Bede Durbidge. Displaying a sick air game in between slicing whatever waves Barra da Tijuca threw at him, Toledo dominated from the start through the 35 minute heat, grabbing a perfect 10 with an aerial move . He captured an 9.57 ride – among a pair of 8-point scores in the heat – tallying a final score of 19.57 to Durbidge’s heat total of 14.70. 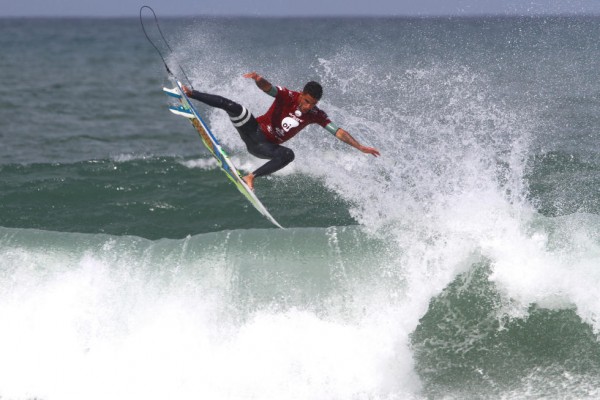 Toledo stands in second place behind fellow countryman Adriano de Souza on the Men’s Top 34, with the rest of the top five including 3x world champ Mick Fanning (AUS), Josh Kerr (AUS), and Nat Young (USA). For the Women, with her back-to-back wins, Conlogue inches closer to unseating Carissa Moore (HAW), with Tyler Wright (AUS), Stephanie Gilmore (AUS) and Lakey Peterson (USA) round out the rest of the top five.

With the title race shaken up in both the Men’s and Women’s tours, the Top 34 and Top 17 now head to Tavarua/Namotu, Fiji for the Fiji Pro, which runs May 31 to June 5 (Women’s) and June 7 to 19 (Men’s) on WorldSurfLeague.com.