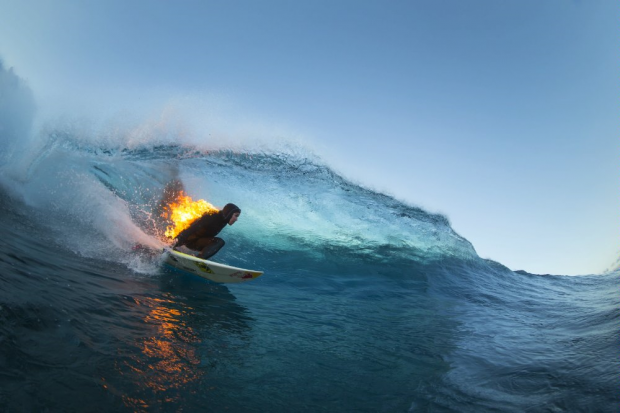 Spending his life on Oahu’s North Shore of Hawai’i, Jamie O’Brien calls Pipeline home and has made a name for himself surfing big swell around the planet. On Wednesday, O’Brien surfed Teahupo’o, one of the gnarliest waves in the world – while lit on fire.

Working in Tahiti with Red Bull and Hollywood stuntman Riley Harper, O’Brien rode the wave while filming for his Red Bull TV series ‘Who Is JOB 5.0’.

“I got a direct message on Instagram that said it would be cool if you lit yourself on fire, and I kinda thought, ‘why not?’” O’Brien said to Red Bull. “So I went to Red Bull and said, “Hey, I want to light myself on fire and get barreled at Teahupo’o.” They looked at me like, “Are you for real?

“The whole barrel lights up fluorescent orange! It’s this really crazy feeling. Usually in the barrel everything slows down and you don’t hear anything, but the noise of a flame in the barrel is incredible. You can’t really describe it.”

Wearing a special thermal wetsuit by Body Glove, the former Pipe Masters champion took off on a perfect Teahupo’o barrel lit on fire, charging like only JOB knows how.